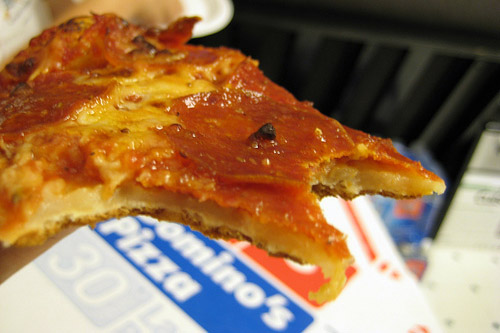 Ed. Note: Looks like Consumerist partially debunked the New York Times story that was one of the sources for this one. Thanks to Cody, one of our readers, for the tip! – Becky

You guys have seen the commercials, right? Domino’s Pizza reformulated their recipe to make their pizzas taste better. What those ads don’t tell you is how they improved the flavor and where they got the money to do it.

Domino’s had a reputation for bad pizza, and last year they launched an (expensive) advertising campaign about their new recipe. Here’s a :15 spot for the “Domino’s Turnaround:”

It turns out the USDA Dairy Management organization helped fund the Domino’s turnaround to the tune of $12 million, and for what? The “improved” pizza features 40% more cheese. Planet Green’s Sara Novak reports that, “One slice of the new pie contains as much as two-thirds of a day’s maximum recommended amount of saturated fat.”

We’ve asked before if you thought that special interests have too much influence within the USDA. What are your thoughts on the USDA’s role in Domino’s new pizza?

Looking for a healthier pizza option? You might try your hand at making your own home made pizza!