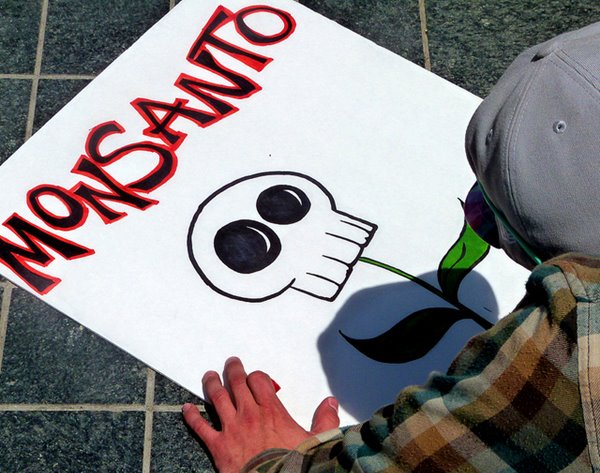 Thanks to WikiLeaks and Food and Water Watch, we know more than ever about the stranglehold Monsanto has on our alleged democracy. A new report reveals U.S. government officials routinely acted as PR reps for Monsanto, to ‘twist the arms’ of small countries in order to sell biotechnology products around the world.

A review of 926 diplomatic cables of correspondence to and from the U.S. State Department and embassies in more than 100 countries found that State Department officials actively promoted the commercialization of specific biotech seeds, according to the report issued by Food & Water Watch, a nonprofit consumer protection group.

The officials tried to quash public criticism of particular companies and facilitated negotiations between foreign governments and seed companies such as Monsanto over issues like patents and intellectual property, the report said.

Thanks to diplomatic cables made available by WikiLeaks, TruthDig reports, we now know that

… American ambassadors are pushing genetically modified products by “twisting the arms of countries,” actively lobbying foreign governments to enact pro-biotechnology policies and waging a vast public relations campaign to improve the image of the biotech industry.

It’s no secret that Monsanto wields a ridiculous fistful of political power, writing its own rules and bullying legislators left and right without any noticeable accountability or legal constraints. But this takes the ludicrousness to a whole new (globally obnoxious) level.

“Globalization changes everything… from the seed to the table, corporations are saying, ‘We want to be the only players’… that is a corporate hijack of our food, and a corporate dictatorship over our food system.”

The global stage allows no room for corporate dictators supplanting representative democracy, if our goals are food stability, food security, and reduced hunger around the world.

We’ve seen an overwhelming (long overdue!) pushback against the behemoth in recent months, including massive global protests against Monsanto this past weekend. Such organized action represents the first most vital step in reclaiming our government for ‘we the people.’ Get involved!

Contact Millions Against Monsanto to find the next protest near you.

Financial pressure and political accountability are the only tools in the box, if we want to wrest the strings of our government from their current puppeteers. Boycott Monsanto products by shopping organic or non-GMO every chance you get — get involved with organized GMO-product boycotts at GMO Free USA. Contact your legislators and agitate for GMO labeling in your state: informed consumers (thanks to hypothetically accurate labeling of GMO products) guarantee problems for Monsanto, since many consumers wouldn’t buy their products if given a fair choice.

For more on why GMOs in general and Monsanto in particular need curtailing, go here:

U.S. government agents have absolutely no rightful business doing duty as Monsanto salesmen. If we the people tolerate this kind of corporate takeover of our allegedly representative government, and call it business as usual rather than unacceptable corruption, we are all suckers and fools.