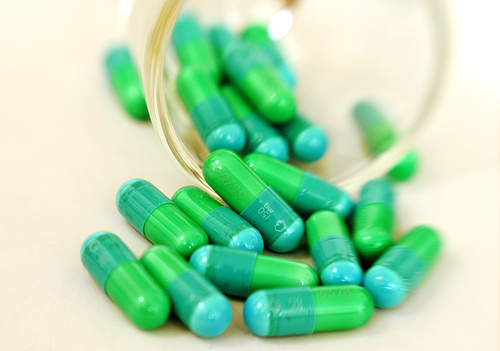 Antibiotics are frequently abused on factory farms. Animals receive doses of human antibiotics aimed at increasing their growth and preventing (rather than treating) disease. This practice is a public health danger, because over time it’s helping breed antibiotic resistant bacteria.

This Friday is the last day for public comment on the new FDA guideline limiting antibiotic use on farms. Several food and health advocacy groups have teamed up to make it easy for you to get heard. You can leave a comment through the form on their website.

The folks at Keep Antibiotics Working have been kind enough to share a Q&A with us on the issue of antibiotics and animal agriculture:

Wouldn’t the “Preservation of Antibiotics for Medical Treatment Act” (H.R. 962/S. 549) ban antibiotics that FDA has already approved as safe?

The legislation would phase out the use of seven classes of medically important antibiotics as feed additives. FDA approved those drugs’ use as antibiotic feed additives many years ago, at a time when resistance issues were far less well understood than they are at present. (Although FDA collected some additional antibiotic-resistance data on feed additives in the early 1980s, it did so using specific test methods that even the animal-drug industry now says “are not predictive” in assessing “the rate and extent of resistance development and the impact this might have on public health.” In other words, data from those tests were ineffectual in assessing whether the drugs are safe in terms of antibiotic resistance.) In contrast, the “Preservation of Antibiotics for Medical Treatment Act” provides that already-approved feed antibiotics can remain on the market only if FDA concludes that they are safe based on current scientific knowledge – the same standard that has been in the law all along. Significantly, the pending legislation does not limit use of any drugs to treat sick animals or to prevent outbreaks in herds and flocks when clinical disease is present.

Why is there a need for legislation? Can’t the FDA handle whatever concerns there are with antibiotic feed additives using its existing legal authorities?
FDA’s record indicates that it would likely take at least 35 years to address the seven classes of medically important antibiotics now used as feed additives. As FDA has itself noted, its existing procedures would require the agency to examine each drug or drug class separately, using a process that “can consume extensive periods of time and Agency resources.” For example, prior withdrawals took five years for therapeutic use of Cipro-like drugs (fluoroquinolones) in poultry, six years for diethylstilbestrol (DES), and 20 years for nitrofurans. Thirty-five-plus years is simply too long to wait for bureaucratic business-as-usual; resistance is likely to render these drugs ineffective by that time.

Studies by the World Health Organization and others have shown that ending the routine use of antibiotic feed additives does not compromise food safety. Studies also show that if animals are raised using good animal-husbandry practices, they do not need to be continually dosed with antibiotics to prevent disease. Such practices include proper diet, good hygiene, and avoiding overcrowding, excessive stress, or premature weaning. Since the continuous use of antibiotics creates antibiotic-resistant bacterial strains, this practice actually threatens human health rather than protecting it – and resistant infections tend to be more virulent than susceptible ones. Experience bears this out: after Denmark ended routine use of antibiotic feed additives, levels of antibiotic-resistant bacteria in animals decreased significantly.

How much impact do resistant bacteria from animals have on human health?

Organizations ranging from the American Medical Association to the National Academy of Sciences have concluded that agricultural use of antibiotics must be reduced in order to help combat the emerging public health crisis of antibiotic resistance. Similarly, an interdisciplinary panel of experts concluded after a two-year review of more than 500 scientific studies that “use of antimicrobials in food animals contributes to the growing problem of antimicrobial resistance in animal and human infections.” Public health experts and scientists, rather than animal-drug producers and agribusiness, should be the ones to make the determination regarding impact on human health. And they have spoken.

Is there is evidence that banning agricultural antibiotics reduces resistance in people?

Studies have shown a decline in certain vancomycin-resistant bacteria (specifically enterococci) isolated from humans after a ban on the agricultural use of avoparcin (which triggers cross-resistance to vancomycin) in European countries. Additionally, the World Health Organization reports that levels of antibiotic-resistant bacteria in food animals have declined since Denmark ended routine use of antibiotic feed additives.

Comparing 1994 with 2001, use of medically important antibiotics has decreased significantly in Denmark. Avoparcin was banned from agricultural use in 1995, with complete phase-out of antibiotic growth promoters by 1999. Overall antibiotic use decreased by 54% between 1994 and 2001, according to the World Health Organization (though there has been a modest increase in the number of piglets treated with therapeutic antibiotics for diarrhea at time of weaning). On average, use of antibiotics in pigs and broiler chickens has declined from essentially life-long, approximately 170 days and 42 days respectively, to less than eight days in pigs and 0.4 days in broilers.

Irradiating meat (itself a controversial technique) could in theory reduce the number of resistant bacteria present on meat. But, even if irradiation could eliminate all bacteria on meat, this would not affect the public health threat from resistant bacteria spread directly from animals or farms to farm workers and their communities, or reduce environmental contamination by resistant bacteria from manure that leaches into ground and surface waters and is placed directly on soil.

What about the cost to producers? Industry-funded studies project that banning antibiotic feed additives would cost the U.S. hog industry $700 million over 10 years, or an increase of $4.50 per pig.

This estimate, from an industry-funded study, ignores real-life experience in countries where use of antibiotic feed additives has already ended. In Denmark, where the transition has already been made, the World Health Organization has documented that Denmark experienced no impact on poultry production costs, and only about a 1% increase in pork production costs (approximately $1.25 per pig). The increase was so small that there was no detectable change in consumer prices. Moreover, the Danish phase-out covered some antibiotics that are not used in human medicine; by contrast, The “Preservation of Antibiotics for Medical Treatment Act” (H.R. 962/S. 549) expressly covers only antibiotic feed additives that are members of classes of drugs used in human medicine.

Variability in animal weights is dependent on a large number of factors independent of use of antibiotic feed additives. Livestock producers that want to maximize profits sort animals by weight before taking them to slaughter. Results of large-scale trials in the U.S. have found that ending the use of antibiotic feed additives in finishing swine does not affect average pig weight or result in greater pig weight variability.

There is no basis to believe that small farms are less well-managed than larger ones. Clearly, restricting the routine use of antibiotics will have a greater impact on farms with poor animal health and unsanitary conditions. But as the U.S. Department of Agriculture has documented, large farms are currently more likely to use antibiotics than small farms. In fact, the majority of farms that use no antibiotics such as pasture-raised or organic pork are family-operated farms. Restrictions on antibiotic use will make these farms more competitive with large-scale “factory” farms.

Doesn’t antibiotic use in animals primarily concern resistance levels in bacteria that cause food-borne illness, and aren’t those rates are already low?

Wrong on both counts. First, using antibiotics in agriculture generates vast quantities of resistant bacteria that can contaminate not only food, but also air, water, and soil, as well as workers. Moreover, bacteria – unlike higher organisms – very easily share their resistance genes even with totally unrelated species of bacteria. As one study noted, “agricultural antibiotic use may generate as many carriers [of resistant bacteria] as hospitals for the simple reason that the population experiences many more meals than hospital discharges.” Focusing only on resistant pathogens directly known to be food- borne in origin ignores the scientific certainty of resistance-gene transfer. Second, even looking just at food-borne illnesses, rates of such illness are still unacceptably high. For example, the Centers for Disease Control and Prevention estimates that the two most common bacterial causes of serious food poisoning – Salmonella and Campylobacter – cause more than 3.8 million illnesses, 29,000 hospitalizations, and 700 deaths annually.19 In addition, recent studies demonstrate that some food-borne bacteria that don’t cause traditional “food poisoning” can themselves cause problems. These include E. coli, the major cause of urinary tract infections, and enterococci, a type of bacteria that causes heart valve infections, gall bladder infections, and life-threatening bloodstream infections in patients with other medical conditions.

Wasn’t there a recent study, which found that data generated through the National Antimicrobial Resistance Monitoring System (NARMS) are too limited and flawed to be a sound decision-making tool?

Significantly, the study was funded by the Animal Health Institute, a trade association for producers of agricultural antibiotics that has long opposed restrictions on use of agricultural antibiotics. While NARMS is not perfect and could certainly benefit from additional resources, the study’s wholesale rejection of the NARMS data is unfounded. In particular, there is no rationale for rejecting trend data from NARMS, as the methodologies used in the program have been consistent since its establishment in 1997. Thus, even if any of AHI’s criticisms of NARMS’ methodologies have merit, those criticisms would only impact the absolute figures, not trends over time. In many instances, the time-trend data are the most critical, including the 6% increase in fluoroquinolone-resistant Campylobacter from 1997 to 2001 (from 13% to 19%, respectively).

What action has the European Union taken?

In 1997, the EU phase banned use of avoparcin as a growth promoter; avoparcin belongs to the glyclopeptide class of antibiotics as does the human-use drug vancomycin. In 1999, the EU phased out growth-promoting uses of four other antibiotics belonging to classes also used in human medicine: namely bacitracin, spiramycin (a macrolide), tylosin (a macrolide), and virginamycin (a streptogramin). Effective January 1, 2006, following the advice of the EU’s Scientific Steering Committee, the four remaining antibiotic growth promoters were banned (namely monensin, salinomycin, avilamycin, and flavophospholipol). The bans do not affect drugs used to treat illness in animals.