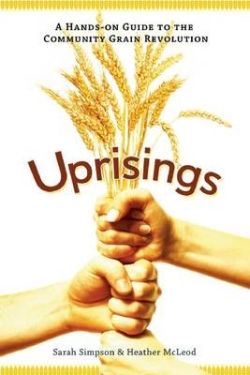 Growing grains locally, whether on a backyard scale or on nearby farms, improves the economic situation of the local community and provides stability in the local food supply. Uprisings: A Hands-On Guide to the Community Grain Revolution shows how groups have come together to grow, harvest, mill, and sell local grains and lists positive steps to start your own local grain movement.

One of the most frequent complaints against the locavore movement has been “we’ll all have to quit eating bread.” This ignores the fact that wheat and other grains have been a staple of human life for thousands of years. Everywhere humans have gone, we have taken grains with us.

The book is divided into two main sections. The first examines ten community grain projects. Each case study looks at how the grain project came into being, what difficulties the project ran into (and they all ran into difficulties), and how and if they overcame those difficulties. Some of the projects focused on providing jobs and economic opportunities for local businesses. Some focused on feeding low-income residents while making enough money from the business to keep going. Each project set its own goals, but all used local grains to achieve those goals.

The second section gets down to the details of growing, harvesting, milling, and even preparing the grains for consumption. Americans eat mostly wheat, so several varieties are covered, both ancient and modern. Just as wheat has traveled with people to new places, people have bred the wheat to survive in local conditions. The authors give suggestions on tracking down older varieties that are adapted to the area, but have fallen out of use in recent decades. Other grains include barley, rye, oats, quinoa, amaranth, and others. The details of growing and harvesting each grain are laid out clearly. Finally, recipes are included.

The case studies are inspiring on their own. Even if you’re not interested in starting a community group, small scale grain growing can be fulfilling and a move toward self sufficiency. Uprisings can help on that path. Uprisings is available on Amazon for about $15.