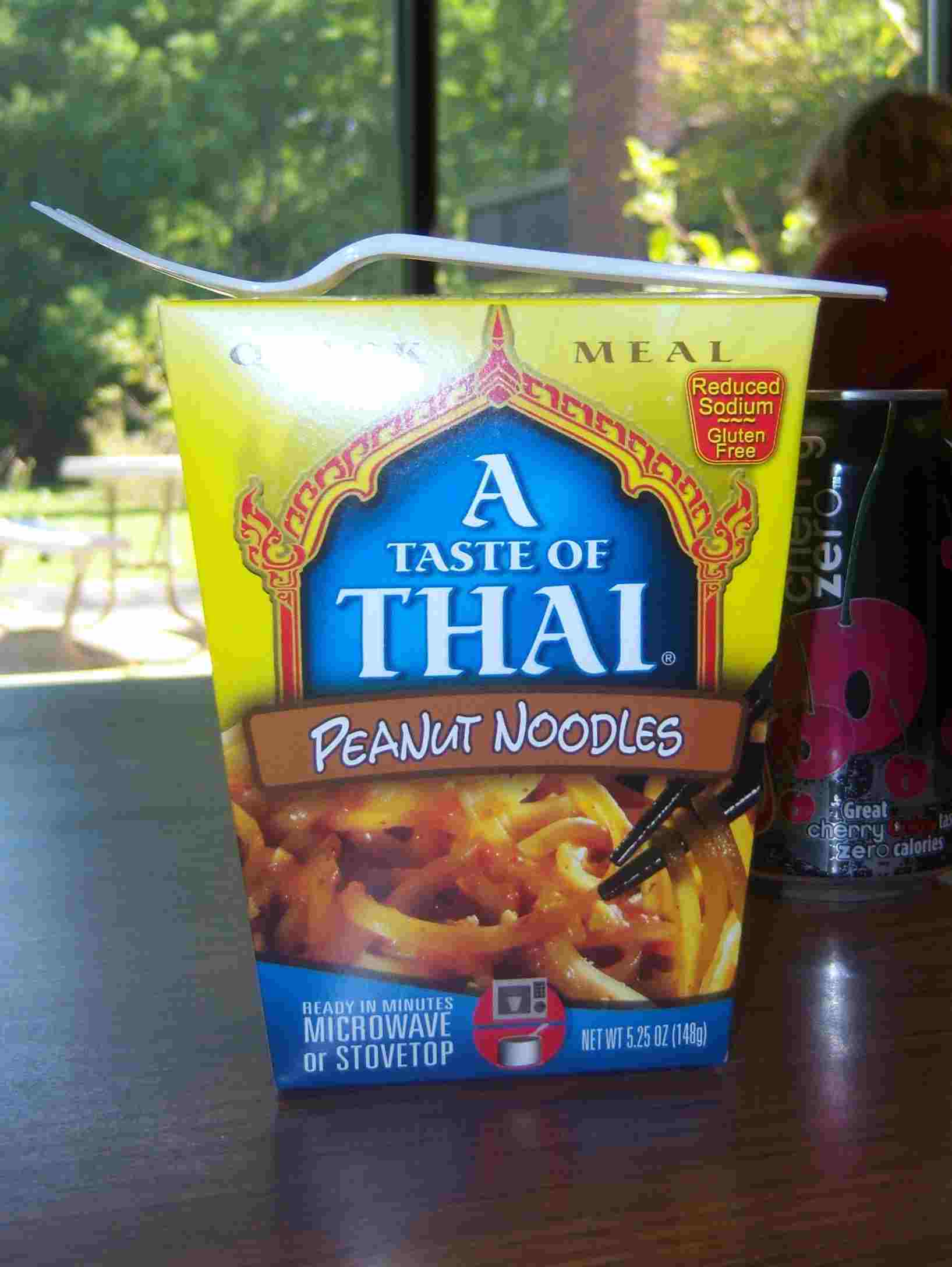 I really, really don’t like Ramen noodles.  To me, Ramen smells like paste.  It looks like tapeworms.  It tastes like seasoned gummy cardboard, and it leaves behind an aftertaste that’s ten times worse than what I experience while it’s actually in my mouth.  I’ve tried to dress it up with different meats, vegetables and sauces, but that never seems to improve things.  Also, I can never get full on just one package, so I always end up eating three, and then wind up feeling cramped and bloated, laying on my couch cursing Nissin, Maruchan, and any other corporation responsible for mass producing the inedible noodle bricks that I somehow  just made edible.

If the world was kind, then Ramen would offer me some health benefits to compensate for its disgustingness.  However, the product offers little nutritional value.  To make matters worse, one package of chicken-flavored Ramen (about two servings) is loaded with sodium—71% of the recommended daily amount.

Ramen is terrible. TERRIBLE.  I see it as a crime against the human body and the culinary arts.  However, these crimes never seem to matter to me, and I eat Ramen time and time again, because it’s quick and easy.  It’s also dirt cheap; to my knowledge, it’s the only meal in existence that I can literally buy on a dime.

A few weeks ago, I went to my local grocery store to refill my kitchen quota of bagels, frozen dinners, and of course, Ramen.  I was making my usual rounds, when an end cap display caught my eye.  The boxes we neatly arranged, and each one was yellow and shaped like a generic Asian food restaurant take-out container.  “A Taste of Thai Quick Meal,” the box labels said to me in unison, and each one displayed an image of what resembled steaming hot Ramen-y noodles.  I grabbed one box and flipped it over to scan the nutrition label.

I received good and bad news.  One box of ATOTQM had a whopping 680 calories, nearly 300 more than what you get from one package of Ramen (both products contained roughly the same amount of fat grams).   However, ATOTQM had roughly two-thirds less sodium than Ramen (28% of the recommended daily amount); in addition, ATOTQM also boasted no preservatives, trans-fat, or gluten. The low-sodium claim appealed to me because my mother has hypertension and constantly chides me about eating too much salt.

I was still kind of conflicted, though, so I raised my eyes from the box I was holding to find my usual deal-breaker: the price.  Whoa, $3.39! For any other product in the grocery store, $3.39 would be considered chump change.  However, this was a dried noodle meal, and I was just a few cart-pushes away from a Great Wall of Top Ramen, something that I knew carried a puny price tag of 10 for $1.  I really just wanted to go the cheap route, but then I mulled it over for a few minutes, and decided take a chance with my cash and my taste buds.

The peanut-noodle ATOTQM box sat in my kitchen cabinet for a while, until last Thursday, when I had what I like to call a Ramen-esque day: I had  to TA a class, then a doctor’s appointment and work, and I knew I wouldn’t have a lot of time to pack or eat a lunch.  So, Ramen—er, ATOTQM it was. I threw my ATOTQM box in my backpack, and when one p.m. rolled around, I headed to my work’s break room for what I hoped would be a quick and tasty lunch.

I opened up the ATOTQM box to examine its contents. There was a peanut sauce packet, a coconut sauce packet, a pouch of real peanuts, and some super-clear noodles that felt like wax.  I added water to the box’s fill line, dumped in the sauces and noodles, and nuked everything for the recommended four minutes.

After letting the noodles cool for one minute, I sprinkled on the peanuts. I’m not going to lie.  At first, I thought it all looked like vomit.  However, it was vomit that I paid $3.39 for, so I took it back to my desk to chow down.

Lucky for me, it tasted pretty good.  The noodles were tender, but still firm enough for me to twirl them into a ball with my fork without them breaking.  Also, all of the noodles were perfectly coated with sauce.  I have to admit that I was a bit hesitant of the peanut and coconut sauce combination, however, the two flavors complimented each other quite well.  The latter taste was slightly stronger than the former, but I suppose that it got an extra boost from the last peanut addition, which added a nice texture to each bite.

The best part was that when I finished the whole thing, I was full.  It’s the first time in my college life that I’ve eaten only one dried noodle meal and felt satisfied.  I did have a strong peanut aftertaste in my mouth, but it was still much better than the gummy, salty film that’s usually left on my tongue when I finish a package of Ramen.  I just grabbed stick of gum and carried went about my business.

I would recommend ATOTQM to my fellow Ramen eaters who may be looking to try something new.  Compared to run-of-the-mill Ramen, ATOTQM is considerably pricier, but you get what you pay for—and in this case, ATOTQM is something that is a bit healthier and (I think) a lot tastier than a lot of its competitor.   One box of ATOTQM is high in calories, but I only had to eat one box to feel full, and that means I ate less calories than I did when I gorged on three packages of Ramen.

I’m personally looking forward to trying the other ATOTQM flavors, and also some of the other ATOT products.  ATOTQM is fast, yummy, and filling, all of which make it super student-friendly.  No, it’s not the perfect, well-balanced, salt-free lunch my mother would recommend, but it is an upgrade from an old college staple she’s been asking me to abandon.  I will now willingly oblige her.

***Note: A Taste of Thai Quick Meal can be found at most grocery stores on the ethnic food aisle. Flavors include: Pad Thai, Coconut Ginger, Yellow Curry, Red Curry, and Peanut.