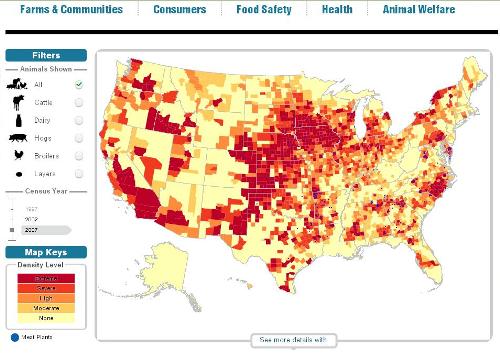 From California to Iowa to Michigan, factory farming has blown up in the past 5-10 years. A new interactive map on this topic created by Food & Water Watch “illustrates the geographic shift in where and how food is raised in the U.S. and allows anyone to quickly search for the highest concentration of animals by region, state and county.”

The number of broiler chickens and dairy cows nearly doubled in that time.

“While more and more light is being shed on the ways our food system is broken and consumers are increasingly interested in knowing where their food comes from, there is still a lot of information that’s hidden from public view,” said Wenonah Hauter, Food & Water Watch’s executive director. “The purpose of the Factory Farm Map is to provide an easy-to-use tool that anyone can access to learn more about where our food is really coming from.”

The number if factory farms has increased and the largest factory farms have gotten even larger in the past 10 years, while the total number of farms on which livestock are raised has decreased.

In California, livestock on factory farms grew by 15% in 5 years.

In Iowa, Food & Water Watch found that elimination of the local control of counties contributed to a rapid rise in factory farming.

In Michigan, the study found that the number of livestock on factory farms increased by nearly 40% in 5 years.

Here are some more key findings:

If anyone in the U.S. thinks they aren’t eating foods from factory farms, they must be vegans, extremely careful about all the food they eat, or crazy.

Do you know where your food comes from?