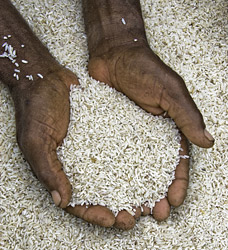 Consumers in the United States struggle with prices rising as much as forty percent for grains and twenty-five percent for eggs, eighty percent for dairy and double-digit increases for other staples. The situation has led to a record number of individuals seeking assistance from food banks nationwide. Globally, however, the crisis has taken on life and death consequences.

As prices have risen, fifty and even three hundred percent in areas like Sierra Leone, these areas have experienced food riots. The growing lists of nations that have had food price protests and riots in the last six months includes Mexico, Haiti, Morocco, Mauritania, Senegal, Guinea, Burkina Faso, Egypt, Cameroon, Yemen, Indonesia, Uzbekistan and Pakistan.

The situation resulted from what some experts call “a perfect storm” of factors combined; oil prices, the use of farmland for ethanol instead of food, Australia’s drought, crop disease, climate change, U.S. economy, and the growth of a more meat-intensive diet worldwide.

The storm has been brewing for some time, according to one author on the subject, Raj Patel. Patel’s book Stuffed and Starved: The Hidden Battle for the World’s Food System chronicles the global problems leading up to our food crisis. He explains how the causes combined to create the current food crisis in an interview with Democracy Now. Patel also posted on his site about the current food riots in Egypt, Haiti, and Senegal.

Thus far, experts on the situation agree that it will not be a short-term issue; it may, in fact, take years to resolve. As Paul Krugman wrote in a op-ed for The New York Times, “Cheap food, like cheap oil, may be a thing of the past.”

In the coming weeks, look for posts on Eat. Drink. Better, that cover the global and national food crisis as well as provide tips on how you can make your food dollars go farther.