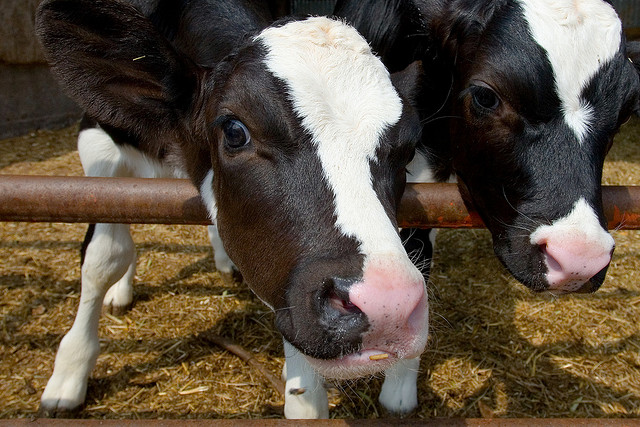 USDA regulators suspended operations at a Hanford, CA dairy-cow slaughterhouse on Monday, after receiving video documentation of rampant cruelty within the facility. Like other recent dairy cruelty scandals brought to light by undercover video, this ugly incident brings the true motive behind ag-gag legislation into sharp focus: any time people see what industrial agriculture does to living things, they are rightfully appalled!

This latest example of dairy cruelty also offers an opportunity for consumers to reflect on what is for some an uncomfortable truth: the dairy industry is riddled with hideous and unjustifiable animal cruelty, whatever ‘humane‘ label advertisers may slap on the package.

The latest cruelty video was reportedly filmed during two weeks in June, by an undercover investigator employed at the Central Valley Meat (CVM) slaughterhouse this summer.

Compassion Over Killing released this information about the investigation, in a Tuesday press release:

Like all federally inspected slaughterhouses, CVM is required to comply with federal animal welfare requirements as well as California’s animal protection laws. However, COK’s whistleblowing video uncovers acts of cruelty that appear to violate both state and federal laws, such as:

Former USDA inspector and supervisor Lester Friedlander, DVM, also reviewed COK’s video and wrote in a statement, “I could not believe the repeated Humane Slaughter Violations that occurred… The company… should be held accountable for these violations.”

In addition to selling meat to the USDA, CVM also supplies major companies, including McDonalds and California-based In-N-Out Burger. Most of the animals slaughtered by CVM are “spent” dairy cows, no longer considered economically viable as milk-producers by the dairy industry.

As of Wednesday, the USDA, McDonald’s, and In-N-Out Burger have suspended or canceled contracts with CVM due to animal cruelty and food safety concerns raised by the video.

The video taken by an undercover investigator for Compassion Over Killing also shows cattle lying in pens unable to move, and at least one unable to stand to leave a stock transportation trailer.

Some clips show cattle with swollen udders that are unable to keep their legs under them. Other footage shows a downed cow trembling and unable to stand even as workers try to pull her up by the tail.

Within hours of seeing the video, the USDA’s Office of Inspector General sent investigators who found evidence of “egregious inhumane handling and treatment of livestock.” The possibility that animals were being inhumanely treated caused officials to shut down the plant while the investigation unfolds

Four minutes of excerpts the animal welfare group provided to The Associated Press showed cows being prepared for slaughter. One worker appears to be suffocating a cow by standing on its muzzle after a gun that injects a bolt into the animal’s head had failed to render it unconscious. In another clip, a cow is still conscious and flailing as a conveyor lifts it by one leg for transport to an area where the animals’ throats are slit for blood draining.

“The horror caught on camera is sickening,” said Erica Meier, executive director of Compassion Over Killing, based in Washington, D.C. “It’s alarming that this is not only a USDA-inspected facility but a supplier to the USDA.”

Slaughterhouse owners Brian and Lawrence Coelho declined to comment on the video. However, they did take a moment to express annoyance at being caught.

“We were extremely disturbed to be informed by the USDA that … our plant could not operate based upon a videotape that was provided to the Department by a third party group that alleged inhumane treatment of animals on our property,” said a company statement.

The disturbing thing — please listen carefully, Coelho brothers, as it’s a key point that your industry somehow seems to find deeply befuddling — is NOT that someone FILMED the abuse, and told the public about it!

The problem is that the abuse itself was allowed to occur.

In the video, workers are seen kicking cows, ramming them with the blades of a forklift, jabbing them in the eyes, applying painful electrical shocks and even torturing them with a hose and water in attempts to force sick or injured animals to walk to slaughter.

As well as animal cruelty offenses, the evidence gathered by HSUS investigators at Hallmark  prompted serious food safety concerns, resulting in the largest beef recall in US history. ‘Downer cows’ — those that can no longer walk — are not supposed to enter the human food supply, because of increased risk of mad cow disease and other food-borne illnesses.

A Mercy for Animals undercover reporter documented severe animal cruelty in 2009 at a one of New York’s largest dairy facilities, Willet Dairy. Among other incidents, that investigation documented:

In 2010, there was a tidal wave of public outrage when undercover reporters filmed stomach-turning cruelty at Conklin Dairy, in Ohio:

… a graphic video it secretly recorded shows workers at a dairy farm beating cows with crowbars, stabbing them with pitchforks and punching them in their heads…

The video shows workers at the federally-subsidized farm holding down newborn calves and stomping on their heads. It shows one worker wiring a cow’s nose to a metal bar near the ground and repeatedly beating it with another bar while it bleeds.

Golly, What a Coincidence!

The typical industry response involves denial of systemic problems, with assertions that whatever outrageous acts of cruelty they were caught inflicting on farm animals represent isolated incidents — that their company maintains the highest standards of animal care, blah blah blah.

But what a coincidence: ‘isolated incidents’ of dairy cow abuse seem to occur every time someone manages to get a camera through the door!

No wonder industrial animal-ag folks are so keen on legislation criminalizing under- cover documentation of animal cruelty, at factory farms and slaughterhouses: consumer ignorance is their only hope!

They know if you see it, you’ll be too sickened to pay them to do it.

Undercover Investigators: HOW DARE YOU?!

People keep having the rude audacity to continually catch these facilities breaking the law, with acts of egregious animal abuse.

Um, I mean, they rudely continually catch them committing incredibly numerous ISOLATED INCIDENTS of breaking the law, with acts of egregious animal abuse — which seem to correlate uncannily with successful infiltration by anyone at all with a hidden camera, into any industrial animal production facility anywhere in America.

Doesn’t matter! Any of the cows in this video could have their milk labeled any of these things — they all end up the same. Whether or not they are raised in a factory farm setting, virtually all animals in the US are slaughtered in places just like Hallmark or Central Valley Meat.

These labels do have positive implications for human health and environmental impact, compared to products from factory farms. I think the argument can be made that shopping for dairy (or other animal-derived) products from less-hideous vs. more-hideous producers is an improvement, in some ways. It’s better than nothing: ok, sure, I’ll go with you that far down the road.

But is that really the best we can do?

Organic, grass fed, or free range labels have nothing to do with animal treatment. Animals whose parts or secretions end up with those ‘humane‘ labels fought just as hard, suffered just as much, and wanted to live just as desperately as their factory-farmed counterparts — and then died in the same place, undergoing the same cruelty.

For cheese. For coffee creamer. For fleeting taste sensations on our tongues.

No Happy Cows in Dairy

Animal cruelty is rampant within the dairy industry, at every step of the way. Cows do not ‘give’ milk; they are kept continually pregnant, their infants are removed just after birth, they are inseminated again, and their offspring’s milk is taken for grown creatures who haven’t had a legitimate need for breast milk in decades.

Meanwhile, their own infants learn the deprivation and misery of a veal crate — their flesh will be avoided by cheese-eating vegetarians, who never realize they’re supporting that very same industry. Dairy cows are used up for human pleasure, confined, exploited, robbed of their young, sucked dry, and when their bodies are too broken to make a buck anymore they’re sent to industrial slaughterhouses — like the one in the late-breaking newest-in-a-continual-stream-of-cruelty video, to suffer violence, terror, pain, and horrible death.

Ditch the Dairy, Ditch the Cruelty!

The abuse is not isolated; it is intrinsic to dairy production. Humans have absolutely no nutritional need for breast milk after infancy — and certainly no need for the breast milk of a whole other species of mammal! Habit is powerful, and change can be daunting: but this kind of dairy cow abuse scandal will occur over and over and over again, until we wean ourselves off the calf food.

Thanks to the failure of ag-gag attempts in California, you’re allowed to know about this most recent round of dairy cow abuse; thanks to undercover reporters across the country — criminalized or not — the secrecy on which industrial animal farming relies is slowly crumbling.

Faced with inexcusable animal cruelty, systematically inflicted on fellow creatures for no better reason than fleeting human pleasure: will we?