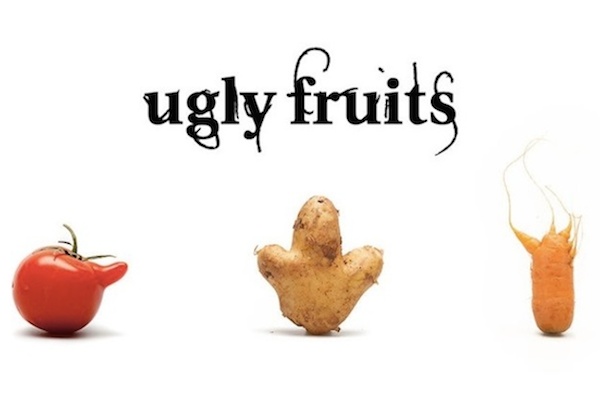 Food waste stats are staggering, and our refusal to buy misshapen, ugly produce is a big part of the problem. But people are starting to flip the script.

I wrote yesterday about the horrid fate of less-than-perfect fruits and vegetables. (They don’t go to the island of misfit food.) But during my research, I read about a lot of organizations and individuals around the world who are making change. Here are their stories…

French retailer Intermarché launched a 2-day campaign in its stores, displaying and selling ugly produce at 30% lower cost than the beautiful stuff. It commissioned well-known food and drink photographer Patrice de Villiers to snap images of misshapen fruit and vegetables and turned them into clever posters. The retailer saw a 60% increase in traffic to its produce department and a 24% uptick in store traffic overall. People don’t mind eating ugly food, especially if it costs less.

Last November in Lisbon, a young lady and a handful of volunteers started a coop called Fruta Feia — which translates to Ugly Fruit. Estimating that about a third of Portugal’s farming produce goes to waste due to retailer and consumer quality standards, Isabel Soares sought to make a difference. She won a $20,000 prize in an entrepreneurship competition held by the Gulbenkian Foundation and began working with local farmers to buy and resell their ugly fruits and vegetables. Now 420 customers are coop members paying a small membership fee and buying a weekly crate of produce — again at a small cost. The organization has sold 21 tons of food at food distribution centers and has a waiting list of 1,000 potential members.

The UK Loves its Ugly Fruits and Veggies

In 2013, a colder-than-usual spring in the UK caused fruits and vegetables to be smaller than normal. In response, several large food retailers decided to relax their cosmetic standards and sell the produce despite its “defects.” And this wasn’t the first positive step taken in the UK. Back in 2006, grocery chain Waitrose began selling ugly fruits and vegetables, promoting them for use in cooking or preserving. That same year, the National Trust held a beauty contest — for the ugliest vegetable in Britain. The fabulously tentacled parsnip pictured below was crowned champion.

In 2013, 3 German students started an “Ugly Fruits” campaign to raise awareness of the food waste epidemic and how our treatment of malformed produce contributes to the problem. They want to see supermarkets created that sell all the produce denied by other retailers. They also created a groovy photo montage of gnarly, knobby, and bulbous fruits and vegetables. You should check it out. Ugly is the new beautiful!