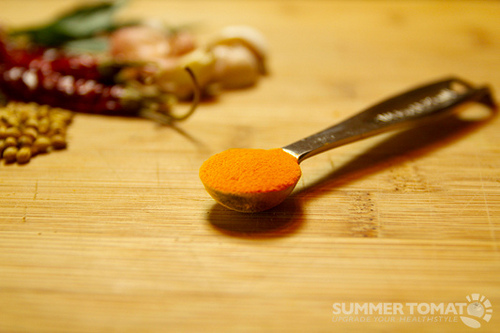 I was lucky enough to know my great-grandparents.  Though I was young, I remember very well that my great-grandmother would take my jacket and put it somewhere, then not remember where it was when I went to leave…so I’d have to rummage through her closets and drawers to find it.

The rates of Alzheimer’s are much lower among elderly Indians than they are in elderly Westerners, and the reason may be all that curry.

Alzheimer’s describes the occurrence of memory loss and dementia that interferes with one’s daily life. It is the most common form of dementia.

Though age is a major risk factor, it is not considered a normal part of aging. Alzheimer’s is linked to the formation of amyloid plaques, sort of like knots that form in the brain.

There are three main spices that make up curry powder: turmeric, cumin and coriander. Scientists think that turmeric may have phytochemicals that can help slow the progression of Alzheimer’s.

Turmeric is a spice derived from the roots of a plant in the ginger family. The same ingredient that gives curry its kick – curcumin – may be responsible for helping the body ward of Alzheimer’s

The phytochemical curcumin may help prevent Alzheimer’s due to the ability of curcumin to reduce amyloid accumulation.

Scientists hope that this discovery will lead to the development of drugs that can prevent, slow and may even reverse Alzheimer’s.