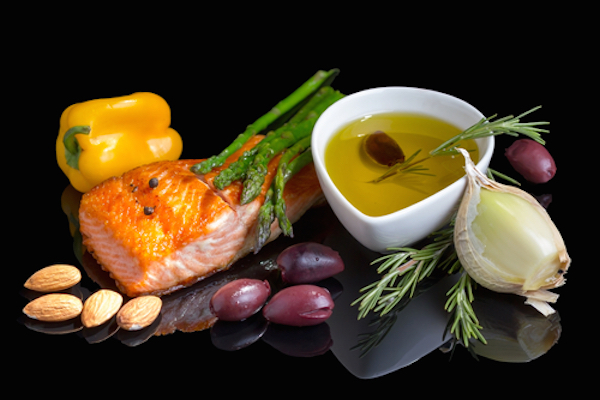 Why You Should Eat Anti-Inflammatory Foods

Inflammation is the body’s response to injury. It’s usually our friend, increasing blood flow to the injured area and causing pain to make us aware of the problem. But a February, 2004 Time Magazine issue called inflammation out as a “secret killer,” linking it to heart attacks, cancer, Alzheimer’s, and other serious diseases.

A U.S. News & World Report article does a great job of describing the “quiet, dark side” of inflammation, also linking it to diabetes, depression, heart disease, and cancer:

Chronic “hidden” inflammation occurs throughout the body when something kick-starts the immune system and disengages the shut-off button. What ignites the fires differs from person to person: repeated or prolonged infections, smoking, or gum disease, for example. Obesity, too, makes you prone to inflammation, as fat cells churn out inflammatory proteins called cytokines. But the end result is the same: An endless trickle of immune cells interferes with the body’s healthy tissues, triggering genetic mutations that can lead to cancer or the bursting of plaque in an artery wall.

Stress, lack of sleep, and a poor diet can also trigger chronic inflammation. And that response intended to help us heal can lead to more harm than just a bum knee or an achy elbow — the two reasons I started looking into eating more anti-inflammatory foods.

The Top 12 Anti-Inflammatory Foods You Should Start Eating Now

Some foods contribute to inflammation. Others help calm it down. This is important if you want to avoid the potential effects that chronic inflammation can have on your body.

And it’s not surprising that a diet rich in whole foods, including healthful carbohydrates and fat and protein sources, is the way to go. If you want to minimize your risk of chronic inflammation, here are some of the best anti-inflammatory foods to put in your piehole:

Oily fish — like salmon, mackerel, tuna, and sardines — are high in omega-3 fatty acids, which have been shown to reduce inflammation. (Those fatty acids have also been shown to reduce rosacea and eczema — an added benefit for your skin.) You need to eat it several times a week and (obviously) prepare it using healthy techniques. Try this delicious recipe for Blackened Salmon with Heirloom Tomato and Two-Olive Salsa.

Whole grains are a good source of fiber, which has been shown to reduce levels of C-reactive protein, a sign of inflammation in the blood. Studies have also shown that consuming whole grains leads to a 30 to 36% reduction in stroke risk, a 21 to 30% reduction in type 2 diabetes risk, and a 25 to 28% reduction in the risk of heart disease. That’s big. Whole Grain Pasta with Kale and Red Beans is a perfect way to get some of that goodness on your table.

They’re a good source of vitamin E which has been shown to protect the body from pro-inflammatory molecules called cytokines. They’re also a great source of calcium and Vitamin K, which are critical for bone health. If you’re riding the “I Heart Kale” bandwagon, check out these 10 recipes from Vibrant Wellness Journal.

Almonds and walnuts are particularly beneficial — high in fiber, vitamin E, and antioxidants, which can help your body fight off and repair the damage caused by inflammation. My husband eats raw walnuts with a drizzle of local honey and a sprinkle of sea salt. It’s quite a tasty treat. You should try it.

Known for its immunity-boosting properties, garlic shuts off pathways that lead to inflammation. Regular garlic consumption has also been shown to protect us from stomach, colon, esophageal, pancreatic, breast, colorectal, intestinal, and prostate cancer. And it’s so damn tasty. I plan to plant some in my urban farm this fall.

Yes, they make you cry, but they also contain anti-inflammatory chemicals that break down to produce substances that fight free radicals. And what’s better than a warming bowl of French Onion Soup during the kind of winter we’re experiencing this year?

Colorful bell peppers and spicy chile peppers can help calm inflammation. Be aware, however, that some people believe nightshade vegetables may exacerbate inflammation in people with rheumatoid arthritis. Here are 7 fresh ways to enjoy bell peppers and another reason to eat chili peppers if you have sinus problems.

Anthocyanins in berries have been shown to have anti-inflammatory properties. And a 2012 study published by the American Neurological Association and Child Neurology Society suggests consuming berries can also delay cognitive decline in the elderly by up to two and a half years. And a cup of raspberries has 8 grams of fiber. That’s good stuff too.

Researchers suggest that tart cherries (not sweet) have the highest anti-inflammatory content of all foods. They recommend eating 1-1/2 cups of them or drinking 1 cup of their juice daily. This is good news because my husband adores tart cherries — particularly in the form of my favorite Cherry Pie.

What can’t olive oil do? It prevents the production of pro-inflammatory enzymes, which is why I mention it here. But it has also been found to protect you from heart disease, promote healthy digestion, and lower gallstone formation. FYI, the anti-inflammatory benefits of extra virgin olive oil — obtained from the first pressing — far surpass that of virgin olive oils obtained from later pressings.

This “wonder herb” is all over the internet lately, but we’ve been writing about it for some time:

The active compound in turmeric, curcumin, has anti-inflammatory and anti-cancer properties. The same compound is currently being studied at the Medical College of Georgia as a treatment for reducing the size of a hemorrhagic stroke. Turmeric is also being researched as a preventative for heart failure, as well as for Alzheimer’s among other diseases.

Turmeric is a proven anti-inflammatory that can reduce swelling and help ease symptoms of osteoarthritis and rheumatoid arthritis. It can also help with digestive issues, improve eyesight, and lead to clear, healthy skin.

Is ginger better than drugs? Non-steroidal anti-inflammatory drugs (NSAIDs), like ibuprofen (Advil) and aspirin, are commonly used to treat mild pain, fever, and inflammation. But there can be side effects, including stomach irritation and kidney damage. And NSAIDs only treat the symptoms of inflammation — not the root cause; ginger treats both. And it’s delicious in a Peach Ginger Smoothie, Ginger Mint Tea, and this Lemon-Ginger Roasted Vegetable Pie.

So, what are you waiting for? Put these 12 anti-inflammatory ingredients on the top of your grocery list, and let’s get cooking for longer, healthier lives.