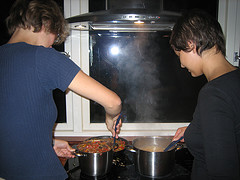 We write a lot about saving money on Thrifty Thursdays, but today I want to write about saving something that is often more valuable than money – time. Making a commitment to eating better often means making a commitment to putting more time into preparing what you are going to eat. Meals made from scratch are more time intensive than meals taken out of a box and thrown in the microwave. Fortunately, they are also much more delicious and nutritious.

Still, many of us our pressed for time. Getting a home cooked meal on the table each night of the week can sometimes seem impossible. Enter the concept of cooking once for the entire week. I haven’t mastered this talent yet, but I watched my friend Donna do it last Sunday, and I was mesmerized.

Donna lives across the street from me and all the boys in the neighborhood were playing in her backyard last Sunday. I popped in the house while my son was throwing a football around, and I found her cooking in her kitchen.

Here’s what I saw.

She had a pot or pan going on each burner of her stove. One large pot was simmering some homemade tomato sauce. In front of that she had chicken thighs cooking up in some water. Next to that was a pan with large and very tiny meatballs in it. And behind that was a smaller pot where she was ladling the broth from the chicken thigh pot into. Additionally, while I was watching her orchestrate all of this, she grabbed a chuck roast, threw some veggies on top of it, wrapped it in tinfoil and threw it in the oven.

Was she cooking for an army? A party? No, just her family of three.

She was simultaneously making a roast, pasta sauce, meatballs, chicken noodle soup, and Italian wedding soup (that’s what the really small meatballs were for). All of that would be the basis for her family’s meals during the week. In the evening when she and her husband get home from work, throwing together a homecooked meal won’t be too difficult because more than half of the work is already done. Boil some pasta and she’s got already got the meatballs and sauce. Grab a loaf of bread and make a quick salad, and she’ got soup to make a meal. I’m sure you’re getting the picture.

By making a habit of taking a couple of hours to cook on Sunday afternoon, Donna saves time during the week. On weeknights, she doesn’t have to worry about what’s for dinner, if she has the time to make it, or if she has all the ingredients for it. She grew up in a family that owned a restaurant and a catering business. Being an organized cook was something she was taught to do. It’s not something I was taught to do. But I can see how it may save me time and aggravation during the week. I think I’m going to put it on my things to figure out how to do list.

Do you cook once a week or have you ever attempted it?