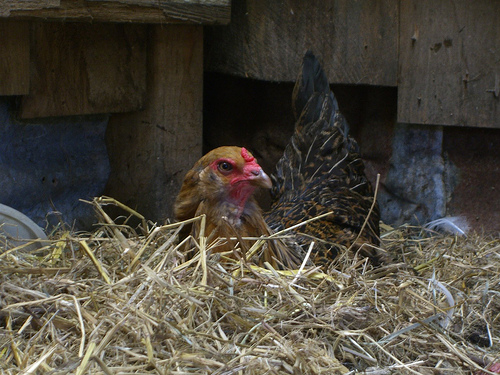 Certified Organic foods are supposed to be grown or raised differently from conventional foods – environmentally-benign pesticides and fertilizers, if any at all, and pastured, humanely-raised animals. But is that always true? The Cornucopia Institute spent two years visiting the chicken farms of organic egg brands and what they found was not always pretty.

Federal regulations require organically-raised chickens to have access to the outdoors, but some of the organic egg companies have thousands of chickens in a metal prefab building with a single two-foot door. Can the chickens even find the door?

Other organic egg companies allow their thousands of chickens access to the outdoors by letting them stand on a screened-in porch. Not a pasture at all.

What the Cornucopia Institute found is that a large number of companies are skirting the organic food standards. Maybe these chickens are technically being raised organically, but consumers expect that their organic eggs were produced differently from those that led to the recent salmonella outbreak. While none of these organic companies are accused of raising diseased animals, the chickens are just as crowded as those on the Wright County Egg farm.

The biggest disappointment – for me, at least – was the number of private labels brands of eco-conscious supermarkets like Whole Foods, Central Market, and Trader Joe’s that failed.

And Now for the Good News

Not all the organic egg farmers are guilty of testing the boundaries of what might be organic. For instance, Common Good Farms in Nebraska gives their chickens 60 square feet of outdoor space and two square feet each of indoor space. They rotate the pasture (good for the soil and the plants). Their chickens get 30% of their nutrition from the pasture and the other 70% from organic feed.

Twenty-nine farms got the top rating of five eggs and another five came in with a four-egg rating. A three-egg rating indicates that a farm complied with the USDA organic minimum standards.

Check the Cornucopia Institute’s organic egg scorecard to see where your preferred brand sits. I’m going to have to switch mine.

Image by benketaro, used with a Creative Commons license.