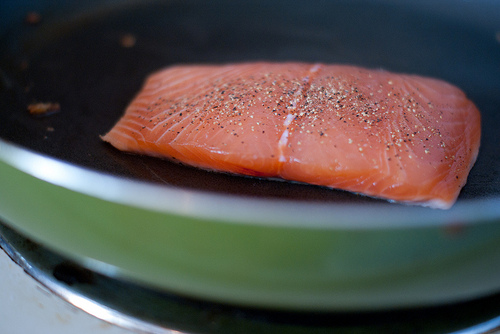 I recently came across this video on Food & Water Watch. It details one of the biggest problems associated with farming salmon: the amount of food required to feed the fish.

The video below was originally released by Skretting, a world leader in industrial fish food production. The company has fishmeal production operations on five continents and brings in about $1.5 billion per year.

Although the video was released in an attempt to promote aquaculture as a sustainable way to produce seafood, it ironically highlights just how many food miles it takes to put farmed salmon on consumers’ plates.

On average it takes three pounds of wild fish to grow one pound of farmed salmon. Skretting’s fishmeal is made from small wild fish like Peruvian anchovy and Norwegian capelin. Although small fish at the bottom of the food chain can be sustainably harvested, the problem with turning these fish into fishmeal is that they’re then shipped thousands of miles to feed farmed salmon. The salmon in turn are flown thousands of miles to reach international markets.

The video really elucidates all of the packaging, shipping, and processing that goes into commercial salmon farming. Something that requires thousands of miles of travel before it becomes dinner can’t be considered a sustainable food.

Making matters worse, waste from salmon farms is released directly into the ocean, along with any antibiotics, pesticides, or fungicides that might be used to keep concentrated fish populations healthy. Parasites and diseases from farmed salmon can also spread to neighboring wild fish, and even the salmon themselves can escape from ocean pens and harm wild populations.

There are so many environmental problems associated with farmed salmon that most are ranked “Avoid” by the Monterey Bay Aquarium’s Seafood Watch. However, it’s worth noting that salmon farmed in inland tank systems in the U.S. are listed as a “Best Choice.” Although these salmon still eat fishmeal, they require less wild fish in their diet than salmon raised in ocean pens. Inland tank systems also contain waste water rather than releasing it into the environment.

Image courtesy of gkdavie via a Creative Commons license.

along with fecal matter, and potentially antibiotics, pesticides and fungicides,