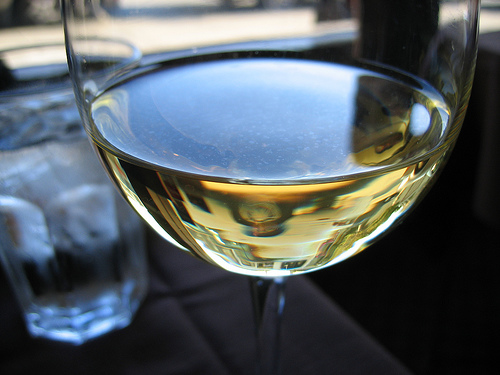 As someone who is interested in the benefits  (and risks) of alcohol consumption, I was not surprised to see a headline this week proclaiming that Alcohol Consumption Boosts Breast Cancer Risk. Nor was I surprised to read previously that Alcohol may thwart breast cancer’s spread.  Not surprised because I have noticed a significant amount of competing information on the topic.

To give you an idea of the breadth of information out there, a search on Medify.com, a site that mines the US Government PubMed database, uncovered these seemingly inconsistent articles:

I tried to find the source of this week’s announcement on the Web so I went to the LiveHelp Online Chat at the National Cancer Institute to find the source. The NCI chat agent responded that “the article is adapted from the NCI Cancer Bulletin and includes a reference to several studies regarding alcohol and breast cancer risk. It includes a discussion of the study completed at Georgetown that you mentioned.” A click through to the source shows a publication date of April 30, 2008.

And, if you read this article carefully, it doesn’t really say that alcohol consumption boosts breast cancer risk. It says, among other things, the study mentioned in the article this week is talking about findings of  increased breast cancer risk among postmenopausal women who drank AND had variations in a gene that codes for the enzyme alcohol dehydrogenase (ADH), which is involved in alcohol metabolism. ADH initiates the breakdown of alcohol into acetaldehyde, which is carcinogenic in animal models.

The bulletin also had some interesting things to say about the alcohol-breast cancer connection:

… two studies were presented that shed additional light on the alcohol-breast cancer connection, including one study that linked alcohol consumption with a significantly increased risk of the most common type of breast cancer…Even though these studies grabbed headlines, researchers stress that important questions remain unanswered, such as which women who drink are at greatest risk, and what biological mechanism(s) alcohol might trigger to cause breast cancer.

Researchers are still accumulating evidence that can form the basis for clinical recommendations, despite the fact that some recommendations had already been made.

A far larger report on cancer prevention in 2007 concluded: “The evidence on cancer justifies a recommendation not to drink alcoholic drinks.

However, the report also acknowledged that “the consistent findings that moderate alcohol consumption can protect against heart disease so … if individuals choose to drink, women should limit their consumption to one alcoholic beverage per day and men to two.”

So is the recommendation not to drink alcoholic drinks or to women should limit their consumption to one alcoholic beverage per day and men to two?  Both apparently.

Even a highly consistent association between alcohol intake and breast cancer risk is not the same as saying causality has been proven…The breast cancer risks involved with alcohol are indeed modest; nothing like the magnitude of the risks between smoking and lung cancer or HPV and cervical cancer, so it’s difficult to be absolutely certain from the available studies that it’s not some other biologic or behavioral factors associated with moderate drinking that are the real etiologic agents in breast cancer.

The results … support the hypothesis that alcohol may increase breast cancer risk via an effect on estrogen. However, the results are not entirely consistent and highlight the difficulty in establishing a risk “threshold.

Botom line (from this article at least):

Our data show that women who report having just several drinks a week don’t have an increased [breast cancer] risk, and the risk begins somewhere between that and two drinks per day.

I still can’t figure out why the article came out today and why was it posted as “news”?

Anyhow, I decided to pose the question to a number of experts.  And like the press coverage on the topic, I received a wide range of opinions. The most reasonable position, in my humble opinion, comes from Dr. Richard Baxter, a top-rated, board-certified cosmetic surgeon, award-winning author, and Chief Medical Officer of Calidora Skin Clinics in of Mountlake Terrace, WA. Dr. Baxter has written extensively about the topic. He wrote a great blog post titled: Wine and breast cancer: Here we go again where he laid out the issues with recent studies. His conclusion? A glass of red wine daily with meals is a healthy habit.

It seems that moderation is key. And knowing about your own individual risk profile. In her Hurst, TX practice, Mary Ann Block, DO, PA, a physician and author, utilizes a blood test that looks at the estrogen metabolism in individual women. She says: “There are several factors involved that can increase the risk of breast and ovarian cancer. One of these factors is alcohol. One of my patients had a very bad cancer risk ratio for estrogen metabolism. Even though I helped her correct all the factors except alcohol, her ratio did not improve until she decreased her 3 glasses of wine with dinner to only one. Her ratio then improved dramatically…If a woman has more than one factor modifying the ratio, including alcohol intake, it would make sense that she might be at even higher risk. Because we are all biochemically different, the results of any medical trial will still vary based on that individuality.”