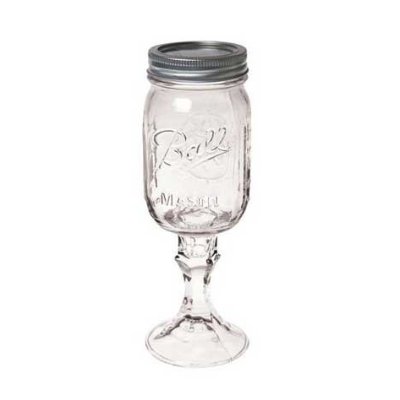 What do you get when you cross an old Mason jar with a candlestick holder?  A wine glass.

At least that’s what Okie Morris from Newport News, VA thought when she came across an old Mason jar and a candlestick holder in a thrift store. From that RedNek wine glasses – simply a Ball Mason jar glued on top of a Libbey candlestick holder – were born. According to CNNMoney.com, Morris calls herself a “repurposer.” “I use old things and give them a new twist,” she said.

Carson Home Accents, a wholesaler of gift and home decor items and family-owned company based in Freeport, PA, saw one of Morris’ glasses in a store and then signed a licensing deal with her to produce the glasses. That was 10 months ago and since then Carson has sold $5 million worth of the “repurposed” glasses. And while Carson Home Accents isn’t explicitly claiming that RedNek wine glasses are repurposed, that does seem to be the suggestion.

All that aside, I love the idea of old mason jars and old candlesticks finding new life as wine glasses. But, it doesn’t sound like RedNek wine glasses are made out of old ones anymore. Fun? Yes. Repurposed? Not so much.