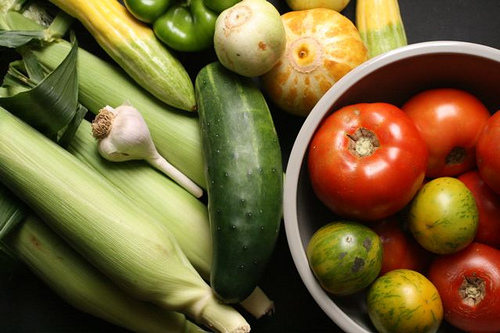 Editor’s Note: This is a contribution from one our content partners, Divine Caroline.

By Patti Ghezzi for DivineCaroline.com

In an effort to live green and eat healthfully, I invested in a local farm. With my year-long Community Supported Agriculture (CSA) membership, I paid a farm a lump sum at the beginning of the growing season and then got regular shares of the farm’s bounty.

My membership taught me how much work it takes to get food out of the ground. I tasted vegetables I had never tried before, such as pak choi and Chinese red noodle beans.

It was an adventure, but I didn’t renew my membership. Sadly, it doesn’t fit into our family’s budget this year. Still, I think everyone who can join a CSA should consider doing so, even if it’s only for a year. When you add up the plusses and the minuses, you’ll probably come out way ahead, like I did.

Pros of My CSA

Learn what grows in your soil.
I’ve lived in Georgia for fifteen years. Yet, until I met Farmer Neil at TaylOrganic Farms, I didn’t know what foods grew here. It turns out we grow asparagus and strawberries in the spring, greens galore, pretty much anything you would want in the summer as long as we get a little rain, and greens, greens, and more greens in the fall and winter.

Live green.
It’s nice to take tote bags to the grocery store, but as green habits go, eating locally grown produce packs a bigger punch. You save on the fuel used to transport food from around the world, you support your local economy, you eat healthier, often better tasting food, and depending on your farmer’s practices, you avoid pesticides and other chemicals.

Have fun in the kitchen.
Some CSAs include recipes in your box so you know what to do with unusual vegetables. A fellow subscriber to my CSA runs a blog that offers recipes and hints for preparing produce. I made green onion crepes stuffed with greens and other yummy dishes. It was fun figuring out what to do with foods I had never heard of and it forced me to do more real cooking.

Learn about farming.
I was humbled by how much labor goes into getting food to come out of the earth. During my CSA year, Farmer Neil rejoiced when he paid off his backhoe and lamented the challenges caused by our drought. He turned his pool into some sort of irrigation system. He traveled south to other farms to get us produce for our farm shares when his farm did not produce enough for his members. The folks at AIG could learn a thing or two from Farmer Neil.

Always have produce to eat.
Your produce share comes week after week. No matter how busy you are, you’ll always have good stuff in the house to eat.

Cons of My CSA

It can be hard finding an open CSA.
Local Harvest lists CSA programs nationwide and there are thousands. But many, including a farm just a few miles from my house, are closed to new members. Others have inconvenient drop-off locations or contracts that require more time or money than you can afford.

Too much produce can be overwhelming.
If you’re used to dining on convenience foods, the sudden onslaught of produce requires a lifestyle change. You have to prep. You have to cook. You need a good cutting board and a sharp knife—and pots and pans. I ended up composting a lot of produce because I just didn’t have time to prepare it.

Too little produce can send you to the grocery store.
Sometimes, the farm doesn’t provide much. A drought or a freeze can hinder production. You may be craving strawberries, but if they’re out of season, you’re out of luck. When you pay for a CSA membership and still end up buying produce at the grocery store, it can be dispiriting.

A hodge-podge can be frustrating.
Getting a box of random produce and turning it into edible meals takes practice. Some greens are tricky to prepare. I never could figure out what to do with parsnips and some of the funny-looking squash I received. And the pumpkin I got in November? It rotted on my porch.

It’s not necessarily a budget strategy.
I believe a savvy cook can make a CSA cost-effective. Over time, learning to eat what’s in season is a good frugal strategy. For me, a novice, the CSA was a budget buster. (CSA’s start at around $16 per week and go up from there, depending on what size box you choose.) I often needed to supplement what I got from the CSA with produce I bought at the store. I had to keep in mind that the purpose of a CSA is to invest in a local farm. Farmer Neil faced a lot of challenges. The $900 I paid for the year was an investment in the big picture—a return to a local food economy.

Though I gave up my CSA membership for this year, I plan to buy from Farmer Neil at my local farmer’s market. And, once my daughter is school-age, I hope to re-join the TaylOrganic Farm. I want my daughter to learn the lessons I did about what it takes to grow food and why it’s important to eat food grown close to home.

Image credit: thebittenword.com from Flickr under a Creative Common’s License