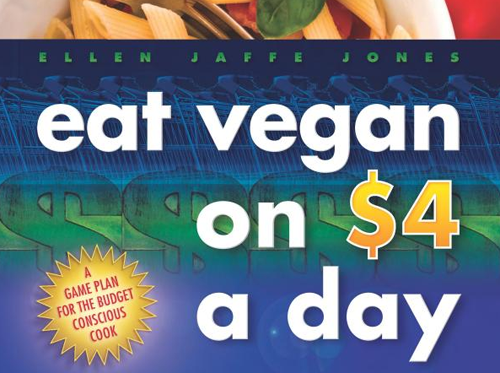 The question or reaction most people have to the title of my book is, “how is that possible?” Not only is it possible, but plant-based doctors like John McDougall have been saying for years that you can eat a healthful vegan diet on $3 a day. It was one of his newsletters in 2008 that gave me the idea to write the book. McDougall said, “The cost of animal-food centered meals cooked at home for one person could easily be $10 a day or more.” I found this to be totally true. I tracked non-vegan staples like meat and dairy too.

In the time I started track prices closely, I saw a gallon of milk rise from $3 to more than $4. The cheapest hamburger meat is $0.14 an ounce …and that’s for the high-fat meat that is 27% fat! Compare that to an ounce of beans which costs a nickel, and you can see that Dr. McDougall’s theory is still true. And the price of beans has hardly budged since I started tracking prices 2 years ago.

The 8 pound bag of pinto beans I’ve tracked started at about $0.05 an ounce and is now $0.06 an ounce. Translation: A 4-ounce serving of meat costs about $0.42 compared to an 4-ounce serving of high-quality, no cholesterol, fiber-rich beans costs $0.18.

Multiply that over your life and do the math. 3 servings of the cheapest, least expensive meat protein a day, eating it 3 times a day, would cost more than $18,000 over 30 years. If you ate the same amount of plant-based protein over 30 years it would only cost $7900. Rib-eye, tenderloin and other cuts of meat are 4 or 5 times more expensive than the cheapest meat cuts, and fast food costs are even more through the roof. So the publisher and I agreed to up the amount to $4 a day to account for inflation and wiggle room. But as you can see, the staples and protein-rich plant-based sources haven’t moved much.

Even though I was the #1 market performer at my branch when I worked at Smith Barney, this book is not meant to read as an accounting document. I wrote the book after seeing too many stories that showed food stamp recipients loading up their shopping carts with macaroni and cheese, and Twinkies saying, “you just can’t eat healthy on a budget.”

As an Emmy-winning TV investigative/consumer reporter who reported on the government’s Consumer Price Index, I was familiar with food prices more so than the average shopper. More importantly, since my mom, aunt and both sisters had breast cancer and many other diseases, I had adopted a vegan diet years ago when doctors told me I had better do something differently to escape family history. It was the year my sister got breast cancer for the second time and the same year that I almost died from colon blockage from a lack of fiber. Doctors said I would need to be on medication the rest of my life.

Why should you care? Because, as Dr. Barnard so kindly said in the foreword to my book, I have no vested interest, no agenda, no product, gimmick or supplement to sell. Frankly, I just want to dodge the bullets of bad genes and poor lifestyle choices that have deprived me and my children of healthy relationships with my extended family. It’s not fair for me, my children, for you, or for your children. My parents were so sick by the time I had children, they couldn’t lift them up, let alone babysit them. I want to be there for my grandkids, as former President Bill Clinton said after going vegan to avoid a third heart surgery, quoting me.

Next>> You can eat vegan on a budget