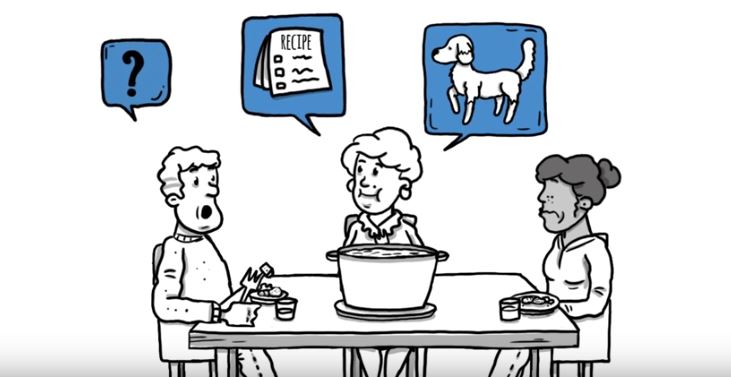 What we eat has as much, or more, to do with our cultural conditioning than it does with what we think our bodies want or need. And considering how environmentally destructive the modern meat-based diet is, and how potentially unhealthy it is, it’s worth pondering why people in some cultures eat meat from cows but not from dogs, while in other cultures eating dog is acceptable.

I’ve often wondered why and how people who are self-professed animal lovers, as well as those who dote on their household pets, continue to stay on the same standard diet (which for some, means they eat anything they want, whenever they want, regardless of their health or their budget or their belief system), while my own choice to eat more precisely or mindfully by being a vegan is seen as something strange.

It’s not my intent to change anyone’s views on their diet or their health, as I detest the heavy-handed efforts of other hardcore vegans to try to convince omnivores that they’re morally inferior, or inherently more unhealthy, or any number of other misguided attempts at proselytizing about going veg. I’m of a mind that everyone should choose the diet that works best for themselves, which is what I’ve done over the last 20 years by paying attention to how certain foods affect not only my body, but my mind as well, and how their production and distribution affect the global environment.

Having said that, I do think that there is a serious gaping hole in most people’s awareness about the kinds of foods they eat, how much of those foods they eat (and the difference between that and how much they really need to eat for optimal health, given their own specific lifestyle and activity level), and how their body responds or reacts to those foods. Given that we tend to be so particular about so many other things in our lives, it’s actually quite surprising to me how rare it is that someone assesses their diet and lifestyle choices before they have a wakeup call from a health crisis or need a medical intervention.

However, it all becomes a bit clearer when food choices are seen as something other than just choices, and are instead seen as an adjunct to a culture and a philosophy (as so many of our so-called choices are, and we don’t really make a discriminating choice, per say, but are rather going with the ‘default’). Just as an example, when I travel or dine out with others, unless I’m going to a restaurant that is specifically vegetarian-friendly, there are only a few options for me choose from (usually just side dishes, not main courses), and even my omnivore friends only get a few choices, because the entire menu is built around dishes based on either beef, chicken, or pork. So what do people choose? Either chicken, beef, or pork, right? You don’t ever hear someone saying “I don’t eat chicken or beef or pork, so do you have any guinea pig or horse or golden retriever?”

[Snarky sidenote: I don’t call people who eat meat carnivores, unless that’s all they eat. My cat is a carnivore. She turns her nose up at just about everything else. My dog, on the other hand, is an omnivore and will eat a large variety of non-meat foods if she can get them. But the term omnivore, which I prefer to use for people who include animal products in their diet, is also misleading, as it implies that they eat everything, and yet most of them only eat a small selection of different kinds of food, and I’d gamble that my vegetarian pantry has more variety in it than that of most omnivores.]

All of this is a very long-winded way of introducing the short video (~18 minutes) from Dr. Melanie Joy at the top of this page. Dr. Joy, who is described as “a Harvard-educated psychologist, professor of psychology and sociology at the University of Massachusetts Boston,” and who authored the book Why We Love Dogs, Eat Pigs, and Wear Cows. Her take on the subject has a lot of merit, in my opinion, and watching her video is time well-spent.

More info on carnism at Beyond Carnism.