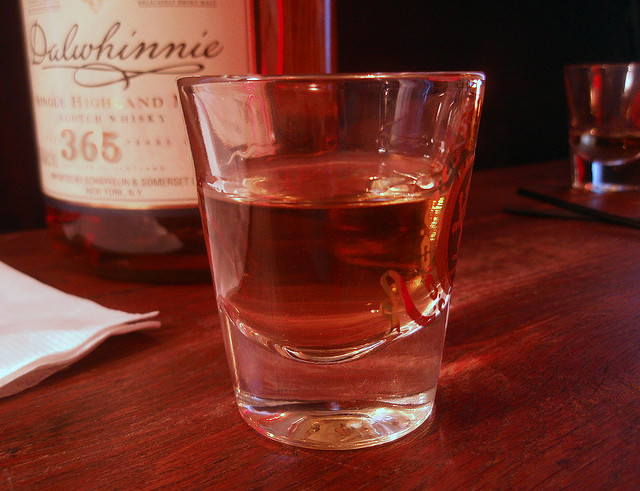 “Sir, have you been drinking tonight?”

“No officer, that’s just my biofuel.”

Researchers have found a way to make biofuel from whiskey by-products that could serve as an alternative to ethanol.  The biofuel is made only from waste, so no new plants need to be grown, which is a big step toward making fuel sustainable.

The short on how whiskey is made

Malting– getting the barley to sprout, then quickly stopping the germination.

Mashing – essentially cooking the malt in hot water to break down complex carbohydrates into sugars.  The liquid (wort) is separated from the solids (draff).

Fermenting – yeast is added and converts the sugars in the wort into alcohol.

Aging – letting the spirits sit to attain the desired flavor.  Usually done in oak barrels for at least 3 years.

How the biofuel is made

The whiskey biofuel is made from the main waste products of the whiskey production process.  There are two stages in the whiskey-making process where the waste occurs: mashing and distilling.  The draff and pot ale, currently used to make farm feeds, are what is used to make the new biofuel.

The draff and pot ale are turned into butanol – a fuel that used to be popular, but lost out to cheaper petro-chemical alternatives.  The processing of the waste products is based on a 100 year old process for making butanol, but adapted to be made from the waste products.

Currently in the US, ethanol is primarily made from corn.  Most gasoline contains 10 percent ethanol to help the gasoline burn more completely and reduce pollution; however, since it’s made from corn, which has to be grown, ethanol’s green-ness is under scrutiny.

Butanol can also be made from petroleum or biologically-based sources.  It is not currently used as a automobile fuel in the US, but it has advantages over ethanol:

Possible benefits of this biofuel

Since it’s made from waste, butanol has the potential to be a green option; however, it will need to be further tested to determine fuel efficiency and effects on pollution.

By 2020, the EU wants at least 10 percent of the fuel sold to be from biofuels, so the whiskey biofuel is good news for Scotland.  They will not have to use up land and other resources to meet the goal.

Alternative fuels are not going to be a one shot deal.  To be truly sustainable, biofuels may have to come from a variety of sources.  Ones like this that are made from local waste products are a great start.