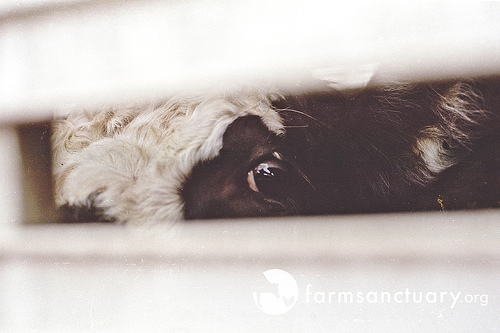 There’s been a huge buzz about Taco Bell’s “beef” and how little there actually is in their tacos. The problem no one seems to be talking about, and what I think the real issue is with Taco Bell and almost all fast food meat, is where that meat comes from.

Rachel touched on this problem in her piece on the Taco Bell lawsuit when she said:

It’s the “industrial beef” that’s the real problem with food like Taco Bell. How did those cows live before they wound up in your 59 cent burrito? Most likely, they lived in a confined space with little to no access to pasture. They breathed the fumes from their own waste, unable to turn around in the tiny spaces.

And that’s if they’re lucky. Many animals in factory farming situations live with frequent abuse on top of these living conditions.

Here’s a video that gives a glimpse into those cows’ lives before they become a Beefy Crunch Burrito or chicken soft taco:

What We Can Do

Of course, the choice I wish more folks would make is to skip the animal products all together, but I also understand that veganism isn’t for everyone.

If you’re not ready to go vegetarian or vegan, you can still make a difference! Can’t face life without meat? You can choose grass fed, free range, and organic animal products. The tricky thing is that labels can be misleading. If meat eaters really want to be responsible, it means looking beyond the label. Industrial meat sometimes masquerades as more humane, thanks to vague labeling standards.

So what do you guys think? Is the problem with Taco Bell that their tacos are 25% beef or how those animals lived before making their way onto the extra value menu? Or is it a little bit of both?