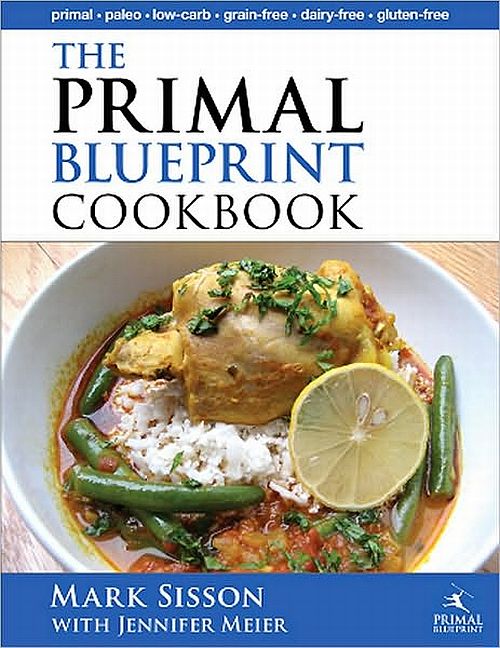 The paleo diet has its fair share of followers. When I saw The Primal Blueprint Cookbook at the bookstore, I thought I’d see what the talk is about and try out some modern-day paleolithic recipes. It was well worth the money.

What Is the Paleo Diet?

What Is the Primal Blueprint?

Primal Blueprint refers to Mark Sisson’s contemporary version of the paleo diet. By contemporary, I mean that he doesn’t require us to eat turtles and lizards in the same proportion our paleolithic ancestors might have. He concentrates more on getting the proportions of macronutrients and micronutrients in our diets in tune with what archaeological evidence indicates people ate before the shift away from hunting and gathering. For more information on the Primal Blueprint, check Mark’s Daily Apple or the book The Primal Blueprint by Mark Sisson.

What’s In The Primal Blueprint Cookbook?

Mark Sisson and Jennifer Meier put together this delicious cookbook containing over one hundred recipes that fit the paleo lifestyle. Recipes are organized into sections: Meat (beef, pork, lamb), Fowl (mostly chicken, but also turkey and duck), Offal, Seafood, Vegetables, Eggs, Primal Substitutes, Marinades and the like, Desserts, and Beverages.

Each section includes recipes ranging from simple basics, like Primal Pot Roast, to the slightly more involved (but still quite easy) Coconut Curry. The section on Primal Substitutes has some clever ideas for substitutes – enchiladas made with egg crepes instead of tortillas, for instance.

The subtitle on this book leaves a little to be desired:  Primal, Low Carb, Paleo, Grain-Free, Dairy-Free and Gluten-Free.  It’s mostly accurate, except for the dairy-free.  Some dairy is used.  The rationale behind using dairy in a paleo diet is discussed in the introduction, but it seems odd for the book cover to claim something the book is not.  Gluten-free is accurate, but it might lead some people to expect more bread-type recipes, and this cookbook has very few bread substitutes.  That’s not a strike against the cookbook itself – I wouldn’t expect bread recipes in a paleo cookbook.  Again, it just seems odd for the cover to make a misleading statement.

Cookbook collectors will love this one. The layout is beautiful and the photos are just gorgeous. You might consider giving The Primal Blueprint Cookbook as a gift.

I tested a few recipes from the cookbook. One was a pot roast in the slow cooker. I’ve made hundreds of those, so I figured I could get this one right with no problem. We got eight servings out of our pot roast with lots of vegetables in each bowl.

I also tried a peach clafouti.  Peaches are in the news lately and this recipe is especially good for those end-of-season peaches that aren’t as pretty.  I think next time I make it, I’ll add a little nutmeg to the batter.

Here are two delicious recipes from The Primal Blueprint Cookbook, used with permission from the author.

Rich balsamic vinegar and a small section of oxtail give this pot roast a very rich and savory flavor. Get it started the night before, or in the morning for a stress-free dinner. This is an excellent recipe for a dinner party.

Warm a few tablespoons of fat or oil in a big, heavy skillet and brown the chuck roast on all sides. Put the section of oxtail in the bottom of the slow cooker. Put the roast on top of the oxtail. Add the onion, garlic, rosemary on top of the beef.

Add water, stock or wine to the pan and deglaze by scraping and dissolving the brown bits on the bottom. Add the liquid to the slow cooker, along with the balsamic vinegar and tomatoes.

Cook covered on low setting for 8 hours. Remove roast to a warmed serving platter. Strain the liquid, discarding the oxtail bones and rosemary stem (leave the leaves), then place remaining onions and tomatoes on top of the roast. Cover the roast with foil to retain heat.

Simmer strained liquid until reduced by half – it will be rich and flavorful due to the oxtail section that cooked along with it.

Spoon some of the reduced sauce over the roast and pass the rest of the sauce in a gravy dish at the table.

Traditionally made with cherries, clafouti (claw-foo-tee) is a non-fussy way to use picked-at-the-peak-of-ripeness seasonal fruit in a not-quite-custard, not-quite-cake format. Delicious for dessert, leftovers are also welcome for breakfast. The relatively low sugar, healthy fats make this a practically guiltless dessert. Most clafouti batters only call for a small amount of wheat flour, so this is an easy conversion with gluten-free, grain-free flours. The amount of sugar in conventional recipes can often be reduced quite a bit, too. Coconut milk can also be substituted for the milk and half & half.

Generously butter a shallow 1 to 1 ½ quart baking dish (or pie plate). Place sliced peaches in dish. In a blender, blend the remaining ingredients for about 2 minutes (a hand held stick blender is fast and easy to clean, or a whisk will work, too). Pour the batter mixture over the peaches. Bake in a 375 F oven for about 40-45 minutes or until clafouti is golden. Let cool slightly, but it’s best served when it is slightly warm.

Garnish with a shake of cinnamon, a drizzle of heavy cream, and/or whipped cream.