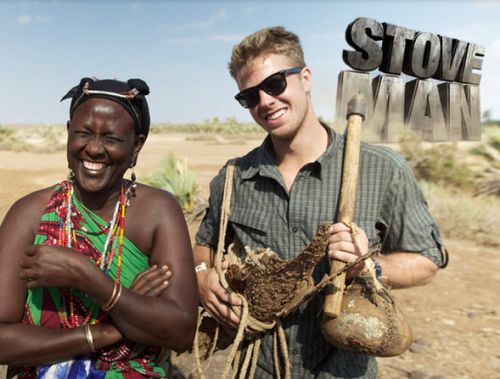 Nearly three billion people still live on a subsistence level and must gather wood to cook with. Cooking every day over an open fire exposes people to smoke the equivalent of two packs of cigarettes a day. It kills 1.6 million people each year through lower respiratory disease, mostly women and children. In fact, it’s the number one killer of children under age five. That one surprised me.

The Paradigm Project started in 2008 and it aims to provide stoves to as many people as possible to save families money and time – an estimated 35% of their annual income and over thirty hours per week of labor to collect the wood and cook over an open fire. Improvements in respiratory health as well as reduced burns from open fires and injuries from collecting the wood will benefit the families enormously.

The use of cookstoves also saves trees and reduces the amount of CO2 reaching the atmosphere. In Kenya, where the Paradigm Project is currently underway, approximately 100 million trees are cut down each year to provide fuel for cooking.

Cutting down trees can lead to a vicious cycle of erosion washing away topsoil, making it difficult for plants (both crops and wild plants) to grow, leaving the land arid and more prone to erosion. When the land is no good for crops or foraging, poverty increases.

Stove Man is a series of videos allowing us to see what the Paradigm Project is doing to combat poverty, health problems, and deforestation.

The first video starts at the edge of the Chalbi desert in northern Kenya. Gabbra women take Paradigm Project’s Greg Spencer and Austin Mann on their all-day hike to collect wood for cooking. The women coppice trees and chop some down and leave the wood on the ground to dry out. They’ll pick up the wood on a future wood gathering walk.

The women carry a large amount of wood and can only cook for two days with it. Greg says the weight of the wood on his shoulders is like someone standing there with butterknives on his feet. The Gabbra women do this three or four times a week.

The series lasts for four weeks. I’m looking forward to the next episode when we watch Greg and Austin cook over an open fire.

The Paradigm Project is partly financed by selling carbon credits to companies looking to offset their carbon emissions. The cookstoves reduce the amount of carbon released into the atmosphere compared to the open fires. They also accept donations. $40 buys a cookstove.