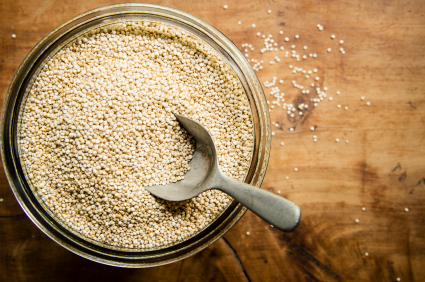 I don’t know about you, but all this news about arsenic in rice is a bummer for this gluten-free green diva! I LOVE rice, and it is the basis of most of the grain alternatives I’ve turned to to avoid gluten – ugh. Now, I realize that not ALL rice is laden with arsenic, but this is all a good lesson in not relying heavily on any one type of grain or food too heavily – moderation and variety are probably always key to balancing out some of the harmful effects of any one food.

In the fall and winter months, our family has become attached to our pot of brown rice pilaf that I make every week. My standard brown rice pilaf is eaten on its own, mixed with other soups or stews and obviously goes as a side dish with many meal menus. So, what’s a green diva (or dude) to do? I’ve turned to the highly-acclaimed, super food known by the Incas as the mother of all grains – quinoa. Check out my quinoa pilaf recipe.

I’m not sure why, but I have resisted quinoa. I think I have an automatic skepticism of any super foods and tend to wait and see what shakes out after the initial media frenzy over any new, super or miracle cure foods. Ok, so this makes me late to the party sometimes, but I’m guessing I’m not the only one still warming up to the many benefits of yummy quinoa . . .