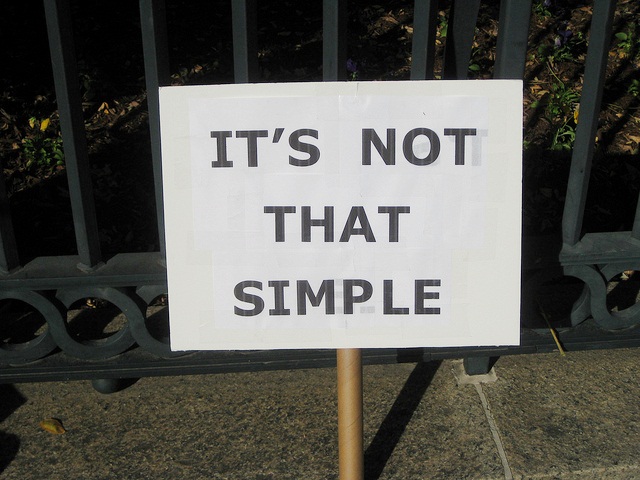 We all tell ourselves stories: as humans, it’s our birthright. We create narratives to explain the world, and to find meaning for our lives within it. As an advocate for conscious eating, I hear all kinds of arguments for widely divergent food habits — and find many of the stories we tell ourselves about food to be destructively bizarre. For example, the myth that ‘everything in moderation’ applies to food choices fails ethical consumers, and needs a sound debunking.

Usually the issue rears its head in conversations like this:

“So you don’t eat meat at all?”
“No, I’m vegan actually — so I don’t eat eggs or dairy either.”
“Huh, really? Why not?”
“Well, there are lots of reasons; basically, it’s about health, sustainability, and ethics. I realized some of the awful stuff caused by an animal based diet, so now I eat plants.”

Various diversions typically come next, at this point in the convo, usually along the lines of  ‘where do you get your protein?’ or ‘eating meat is natural’ or ‘that’s what they’re FOR, God wants us to!‘ or ‘but what about the poor plants?!’ or similar noncompelling arguments.

So we drive down those discouragingly well-worn paths for a while, coming finally to a point where fictional misconception must (one would hope) give ground to reality and reason.

But no! Instead — THWAP! — the ‘moderation’ card hits the table:

“Well I don’t eat much meat or dairy; but, you know, everything in moderation.”

The funny thing is that it’s always played as a trump card, as if to say, ‘haHA! gotcha there, didn’t I?!’ Or worse: ‘There, now I don’t have to think about THAT anymore!’

Would anyone really argue that moderate smoking is healthier than not smoking? Is a moderate case of bubonic plague better than none at all? Does anyone want to live in a home with a moderate domestic violence problem?

Imagine your response if I were to say, “I don’t torture my child much; I’ve cut way back. But, you know, everything in moderation.” Would that sound like morally reasonable behavior, or coherent logic?

Sometimes ethically consistent moral reasoning calls for aversion; not moderation. No rape is better than a moderate amount of rape; no genocide is better than moderate genocidal activities; and no ebola beats moderate ebola by a landslide!

The stories we tell ourselves about the food we eat, for some reason — possibly due to the same primal pleasure-survival matrix that screws up how we think about sex — aren’t held to the same standards of reason as are our other cultural stories. Under scrutiny, the moderation story as an excuse for optional violence towards other animals, for the sake of human pleasure, won’t carry water nor transform it into wine: bad ideas are still bad ideas, and should (as such) be avoided wherever possible.

Less badness is better than more badness; yeah, ok, I’m on board so far!

The idea that a moderate amount of optional lifestyle-driven disease; or moderate participation in avoidable environmental devastation; or a moderate amount of completely unnecessary violence and misery inflicted on living creatures is somehow okey-dokey — when we could instead easily opt out, just by eating other things…

That idea is patently absurd, and deserves no seat at a healthy, sustainable, and ethical table.