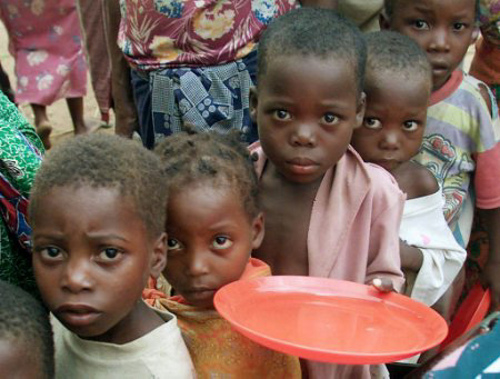 If you have read some of my earlier posts you know that I see a positive, but actually quite limited role for “local food.” But there is a situation where the increased production of “local food” is not just a nice concept – it is a moral imperative.

I’m talking about places like rural, sub-Saharan Africa where millions of people that are “small-holder farmers” live almost exclusively off the supply of local food.  Settings like this are where the vast majority of chronically hungry people live.  They desperately need to improve the productivity of their farms, but their prospects of doing that have been long denied through a combination of their own unhelpful governments, declining international aid, and misguided interference by anti-technology groups from the rich world.  Some of the same constituencies that are promoting “local” in the US and Europe have been actively involved in preventing the technology advances that are necessary to improve the supply of “local food” to the world’s poorest people.

There is an excellent discussion of this conundrum in the new book by Political Scientist/Economist, Robert Paarlberg (Food Politics, Oxford University Press).  Paarlberg is a professor at Wellesley and an Associate at the Weatherhead Center for International Affaires at Harvard.  Throughout his long career he has become one of the world’s foremost experts on international food policy.

Paarlberg describes how, even though the original “Green Revolution” was a great success, opposition arose from anti-technology circles concerned about the environment and social changes.  The parts of the world that experienced the Green Revolution now have far lower rates of poverty and hunger than those regions that didn’t.   In spite of this, a coalition of 670 NGOs sent a 2004 letter to the FAO describing the green revolution as a “tragedy.”  Indeed, there were environmental issues associated with the Green Revolution, but the solution to that is to take all we have learned in the mean time and use that to extend a “doubly green revolution” to those that still need it.

Paarlberg notes that the Green Revolution made much less headway in Africa than in Asia and Latin America because international agencies tried to shortcut the development of locally adapted crop varieties.  They brought in Asian or Latin American varieties which did not perform well for the Africans.  By the time this mistake was being corrected, international assistance was declining because the foreign donor nations believed that the “food crisis” was over.  Also, the concept of “agroecology” was being increasingly promoted by the NGO community.  This is the idea that traditional or indigenous knowledge systems will lead to a more sustainable farming system than reliance on technology.  NGO’s have been increasingly successful at blocking green revolution approaches, and in his book Paarlberg describes how between 1980 and 2003, real dollar assistance to modernize agriculture via technology in the developing world has declined 64%.

The Sad State of Local Food in Sub-Saharan Africa

Most African farmers continue to farm in the way that agroecology advocates would “prefer”, and they continue to be very unproductive, poor and often hungry.  While urban populations in Africa (and thus governments) are kept satisfied with international food aid, the rural poor, who are politically powerless and almost totally dependent on “local” food, see cereal crop yields that are very low and not increasing even as population rises.  The farmers, mostly women, earn around $1/day and they and their families are under-nourished.  Their land is increasingly degraded from lack of fertilizer input and new land needs to be exploited.

Current Attempts to Fix This Problem and the Opposition

With governmental support for international agricultural development vanishing, it has fallen to private philanthropy to fill the gap. When the Rockefeller Foundation and the Gates Foundation partnered to fund the Alliance for a Green Revolution in Africa (AGRA) in 2006, they came under immediate attack from activist groups because it would be extending technology to these poor farmers.

Paarlberg criticises environmental NGOs for “their tendency to export the concerns of rich countries to developing countries.”  He points out that respect to agricultural technology, “the concerns of the rich are not always well matched to the needs of the poor.”

Environmental NGO activism is certainly only part of the reason behind the persistant poverty in Sub-Saharan Africa, but it is significant.  National governments there have largely failed to provide the infrastructure investment (rural roads, electricity, water projects…) or to contribute to technology development.  International aid has also failed to address these problems.  The infrastructure investments of the previous colonial powers were focused on things like mineral extraction – not agriculture.

Most of the world will soon be below “replacement rate” and moving towards having an older and eventually smaller population.  Sub-Saharan Africa is not projected to see that transition until later in this century.  In the mean time, this population that is so dependent on “local food productivity” will grow.  Wouldn’t it make more sense to foster a “doubly green revolution” than to let these people continue to go hungry?

You are welcome to comment on this site or to email me at feedback.sdsavage@gmail.com