A barrage of emails flooded my work inbox. Usually this indicates some kind of burning deadline or project gone awry. The topic of such frenzied communication in this case? Chili Fridays.

Given the, uh, heat of the chili debate, I decided a bit of research was in order. It is time to settle the Chili Friday Controversy.

Con Carne or Sin Carne?
The most pressing issue in the Great Chili Debate seems to be the question of meat versus no meat. Folks are just plain passionate about their chili. So, which came first, meat or bean?

Meat. Which likely explains why most major chili cookoffs disqualify entries that contain beans. Evidence of the chili dating back to pre-Columbian times consisted of meat and chili peppers, and occasionally included masa, or corn meal.

Now, just because those early recipes contained corn meal, in no way does this legitimatize “Frito Pie.” Greasy, bland meat, fritos and processed “cheese spread” is not chili. It’s not even actual food.

The use of starchy filler in the recipe does open the door to the question of beans. It is thought that, beans were first added to the dish as a way to make the dish go farther for families that could not afford the all meat version.

The approach not only makes great fiscal sense, but, as we are now figuring out, is much more environmentally responsible, too. And, it just tastes good. Something about the beans and chilis, in combination with the meat, well, it works. Which explains why so many people are adamant about chili with beans AND meat.

This brings us to the next hotly debated question in that office Chili Friday debate.

Do “Pork and Beans” and “Beanie Weenies” Count?

Um, count as what? Food?

It’s not that beans and meat together don’t work. It’s just that you need to grasp the history and status of this combination from a culinary perspective. Some of the most obsessed about recipes dating back to at least the 14th century are comprised of meat and beans. I am referring here to the classic French dish known as cassoulet.

Believe me, if you think chili is a hot debate here, it’s nothing compared to cassoulet in various regions of France. There are national standards that set requirements for how the dish should be prepared. And that preparation is sublime. Duck confit and the finest sausages in contrast with creamy white beans and herbs. One bite, and you understand; beanie weenies suck. Much less what may lurk in the hot dogs.

It’s not that the meats have to be expensive, either. This classic cuisine of France and southern Europe, and specifically Spain and Portugal also inspired feijoada, the national dish of Brazil.

The dish consists primarily of black beans and pork, usually the cheaper cuts like ham hock, plus sausages. The use of these cheaper cuts of meat is lodged in the history of the dish as a “food of the people.”
I recently had the privilege of “being Brazilian” at an ethnic festival, helping prepare this dish with our Brazilian friends. Feijoada is very similar to Southern-style ham and beans that also uses ham hock or smoked jowl, but favors black-eyed or purple hull peas instead of black beans. The dish is simply rich, satisfying soul food.

Pork and beans, however, with its bland, ketchupy sauce and lonely lump of dubious pork fat really can’t be considered here. So, beans: yes. Pork and beans of the canned persuation: NO.

The Right Stuff
There are other chili ingredients that are subject to lesser debate. For example, the use of chili powder instead of real chilis and the use of tomatoes as an ingredient. Personally, I like tomatoes in a red chili. They add nutrition and help make a one-pot meal. As for the chilis, fresh is best.

On the Side
Here, I am going to take a stand. While cassoulet is likely best served with a crusty baguette, feijioada and Latin American bean dishes pair well with rice, there is no other side that pairs better with chili than cornbread. No Fritos.

As far as condiments, if you are serving raw onions, then the chili probably needed more onion to begin with. Besides, it’s a work event. We have to breathe on each other the rest of the day. No raw onions. A bit of cheese is nice, because cheese goes well with just about everything.

The Other White Meats (and Chilis)

Even as a chili purist, I don’t think you can deny the merits of chile verde. The slow-cooked pork in a mild green chili sauce can hold its own alongside “red” chili as far as I am concerned. I am also not against a good turkey and white bean chili, and have strayed over to the less conventional Cincinnati Chili complete with spaghetti noodles. I think there is a lot to be missed if you insist on being a purist.

Except maybe the beanie weenies. We won’t miss those.

So, I ask you, foodies, what’s your take on the Chili Friday Debate? 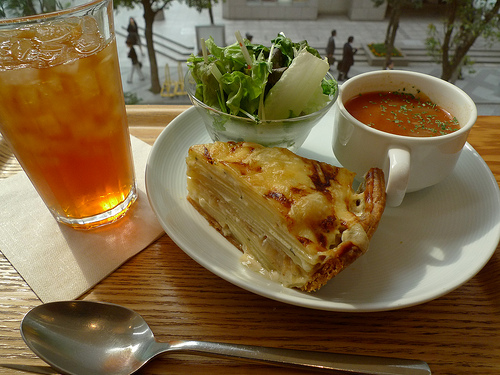