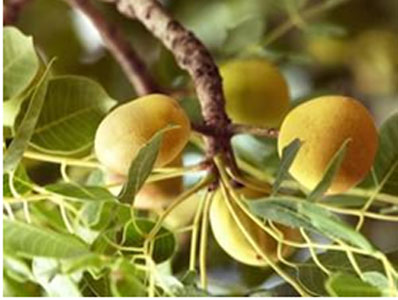 Today, Nourishing the Planet takes a look at five varieties of tree that you have likely never heard of, but that are helping to alleviate hunger and poverty and protect the environment.

We know that trees can help mitigate climate change by sequestering carbon dioxide from the earth’s atmosphere. But what is less widely understood is how many of these trees can also help to bring an end to hunger and poverty.

Black plums are common across tropical sub-Saharan Africa’s coastal savannas and savanna woodlands. The black plum tree is not domesticated, but it is widely utilized and protected, and is often found at the center of West African villages. The black plum is useful in agroforestry and organic farming. It is nitrogen fixing, meaning it adds nitrogen to the soils it grows in. Whether the tree is growing in fields or along boundaries, crops can benefit from natural soil nutrients. Leaves from the tree are also used as nutrient-rich mulch.

Best Way to Eat Black Plum: The fruit makes good quality jellies and jams, as well as a black molasses. A beverage similar in flavor to coffee is also made from roasted fruits. Young, leafy shoots from the tree are picked, boiled, seasoned, and eaten like spinach.

Ebony wood is world renowned for its dense fine-grain quality and rich dark color. It is prized for use in musical instruments, such as pianos and violins, and is considered superior for woodcarving. The tropical species—including Africa’s most common, the jackalberry (Diospyros mespiliformis)—produce the finest ebony wood and a fruit akin to the persimmon.

Best Way to Eat Ebony: The fruits are commonly eaten fresh, dried, or pulped for sauces. They can be used in porridges and toffee, brewed into beer, fermented into wine, and distilled into an ebony brandy. In Namibia they are made into a hot liqueur called ombike.

Ebony in Action: The roots of the jackalberry tree are made into a mixture for treating dysentery and fever and getting rid of parasites. The mixture has also been used to help treat leprosy in Southern Africa. Ebonies are also protecting African communities from famine. The tree’s deep roots keep its leaves green during drought, which can be emergency fodder for grazing livestock when grasses dry up.

The marula tree is found throughout 29 sub-Saharan African countries—from Cape Verde to Ethiopia to South Africa. While the tree is not domesticated, the marula tree has been intentionally cultivated in the wild for hundreds of years, and its distribution closely matches human migration patterns.

Best Way to Eat Marula: In the center of each fruit is a large nut stone, which contains a soft macadamia-like nut kernel. The highly nutritious kernels, which are eaten raw and roasted, are rich in antioxidants.

Marula in Action: In South Africa alone, around 500 tons of marula fruit is commercially processed for juice and 2,000 tons for Amarula Cream every year. In Namibia, Botswana, Zimbabwe, and South Africa, fruits are often collected and sold by villagers to marula processing facilities.

Indigenous to West Africa, a Dika tree can grow to be as tall as 40 meters and produces a small green and yellow fruit that looks, at first glance, like a small mango. When forests are cleared in West Africa for firewood or for farmland, the Dika trees are, more often than not, left untouched. Farmers have too much to gain from harvesting the tree’s fruits and seeds.

Best Way to Eat Dika: Resembling smooth walnuts, Dika seeds are cracked open by harvesters to collect the edible kernel contained inside. These kernals can be eaten raw or roasted, but most are processed and pounded into Dika butter or compacted into bars or pressed to produce cooking oil.

Dika in Action: Each year, thousands of tons of “Dika nuts” are harvested throughout Western Africa, providing a critical income to millions of farmers and harvesters throughout West Africa.

Serving not only as a reliable source of food, moringa also provides lamp oil, wood, paper, liquid fuel, skin treatments, and the means to help purify water. The moringa tree comprises 4 different edible parts: pods, leaves, seeds, and roots. The green-bean looking pods are the most sought-after parts, not only because of their taste – similar to asparagus – but also because they are highly nutritious. Moringa trees are also used in agroforestry and mixed cropping because the shade can protect other crops from the sun and, while smoke from household fires can pollute the air, the soft, spongy moringa wood burns cleanly with little smoke or odor, making it a cleaner source of fuel.

Best Way to Eat Moringa: People commonly boil the tiny leaflets and eat them like spinach. Like the pods, the leaves contain vitamins A and C as well as more calcium than most other greens. These leaves also contain such high levels of iron that doctors frequently prescribe them for anemic patients.

Moringa in Action: The moringa tree is best known for its endless supply of food, but one of the most innovative uses of the plant has been to treat water and wastewater. Researchers at Leicester University in the United Kingdom, have found that mixing crushed moringa seeds with polluted water help settle silt and other contaminants. This is highly cost effective because the seeds can replace the expensive imported material usually used for water purification in rural areas. The seed filtered water still needs a final filtration before it is completely drinkable, but the seeds make the process easier and help other water filters last longer.