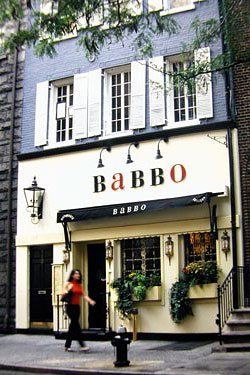 [social_buttons]Understanding Italian food culture was the first of Buford’s challenges.  Mario, the master chef at Babbo, New York’s three-star gourmet Italian restaurant, literally put Buford on the firing line as a line cook, apprentice and chef.  Buford learned that Mario’s passion for perfectly-prepared Italian dishes came from his native roots and his own initiations at restaurants in Bologna, Florence and elsewhere. “People should think there are grandmothers in the back preparing their dinner,” he told Buford. Italian recipes are centuries-old traditions that include meticulous directions for dropping pasta, braising meat and making light sauces for wild game entrees. Buford refers to Armandino Batali’s stack of recipe cards as a “kitchen conversation between the dead and the living.” As Miriam said, “What I do has been handed down to me.” It was about “how to cook with love.”

Babbo dishes steam with tradition. A stock other than chicken or a sauce that thick enough to leave a finger impression is “too French.” Seafood with butter in an Italian kitchen is “culinary blasphemy.” Italian ragu is not an Americanized spaghetti sauce but the name for an entree made with carefully-prepared, slow-cooked beef or pork with milk, broth or wine, and either tomatoes or no tomatoes.  The most famous is Bolognese, named after its city of origin.  Above all, fresh pasta is not macaroni.  Fresh pasta is generally hand-made, though Babbo uses a machine, and is best made with cage-free eggs.  Pasta is about making the dough, not the sauce. Buford found that pasta recipes with or without eggs went back centuries.  Ravioli stuffings are NOT meat like Chef Boy Ar Dee but beets and spinach or blended peas and cheeses. Filled pasta is a vehicle for ragu. Buford made ragu alla Medici, a dish named after the family whose kitchens represented the high point of Italian cooking.

The “reality of the kitchen” was preparing food on an exact schedule under tremendous stress and oven or grill heat. “Replate, you’ve got too much oil in it!,” “Season the pan, not the fish!,” ” I said fine dice. This is not a fine dice!,” “They’re overcooked, you f ******* moron! You’ve ruined them, you g**d*** f****** navvy,!” “What have you done? You’re throwing away the best part of the celery!” . . .”We don’t make money buying food and throwing it away!”  That’s just some of the feedback Buford got on the job. Combine that with a fast pace under sweltering heat at the grill station and his journey of becoming more human was a national best-selling version of “Hell’s Kitchen,” with different personalities, tempers, and accents.

For Buford, it was worth it.  Despite Mario “not seeing the same world I see,” Buford became an expert at preparing lamb tongues, making polenta according to an ancient recipe, creating pasta dough and ragu that was actually served to costumers, learning how to “judge meat” and to appreciate the value of breeding for beef animals in Dario’s butcher shop.  He also commanded colleagues to “Replate!” and “Redo!” when they made the same mistakes he had made at Babbo. ” I licked some polenta off my knuckles: it tasted good. It was done.” After a hectic night as line cook, Frankie told him. “You saved our ass.”  He had wasted food, burned and cut himself, and questioned whether he should go home after more errors and verbal assaults. As he became more accomplished, Buford still wondered, “Maybe I didn’t have the constitution for this life after all.” He wondered if being a chef was in his blood, as Memo had told him it had to be.

At the end, however, Mario paid the ultimate compliment, asking, “So what about your own restaurant?” Buford realized that he didn’t want a restaurant, that he had  mastered food in one tradition. He told Mario he wasn’t] ready because he couldn’t understand Italian cooking without crossing the Alps and going to France.

In a way, Buford is right.  His experience helped him master one food tradition because it was so different from his own.  We all learn best when we see how others do somet]hing, from cooking to driving to writing. Buford stood the heat and wouldn’t get out of the kitchen — not when he could learn more about food cultures. Now, that’s cool.