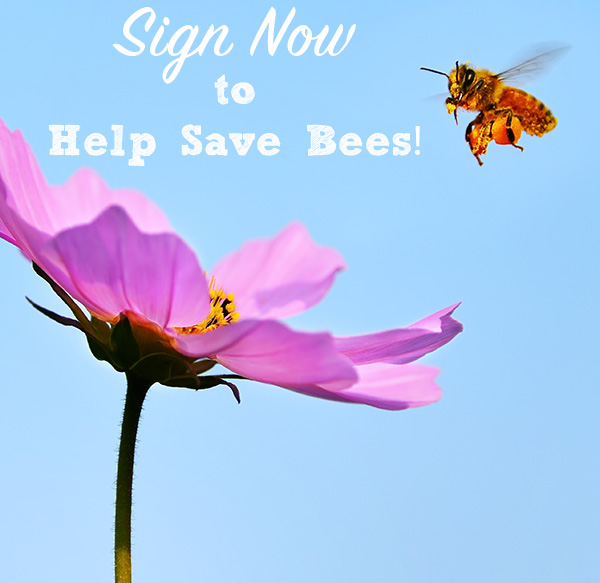 Right now bees and crucial pollinators are being needlessly exposed to toxic pesticides – We need your help today to make sure that America’s endangered pollinators survive!

Any day now, the White House Pollinator Health Task Force is expected to announce its federal strategy regarding the Obama administration’s plan to protect America’s endangered pollinators. For the nearly a decade, honey bees across the U.S. have experienced an alarming decline in numbers, with massive bee die-offs being reported by hundreds of beekeepers and in the media.

So far, the White House task force has not focused on one of the primary threats to bees and other crucial pollinators: pesticide exposure!

Last year, an international study found that the most widely used class of nerve-targeting insecticides called neonicotinoids or “neonics” are a widespread toxin in the environment and a leading cause of bee and pollinator die-offs.

Incredibly, bees are responsible for 1 in 3 bites of food we eat, but they’re dying off at alarming rates. The President and his administration have the power to help protect these creatures that are so essential for our agricultural economy and food system by suspending bee-killing pesticides.

Right now the pesticide industry is lobbying hard to ensure the administration doesn’t take action on these toxic pesticides. But we’re fighting back, but we can’t do this alone. We need you with us to urge Obama to put our food system and environment ahead of Bayer and Syngenta’s profits.

Join Food Democracy Now! and our allies at Center for Food Safety, Friends of the Earth, Beyond Pesticides, Pesticide Action Network, the Natural Resources Defense Council, Organic Consumers Association and dozens of other groups as we rally to deliver your signature to the White House on March 4, demanding that the task force listen scientists and beekeepers – and not the pesticide companies – to support a ban on bee-killing pesticides.