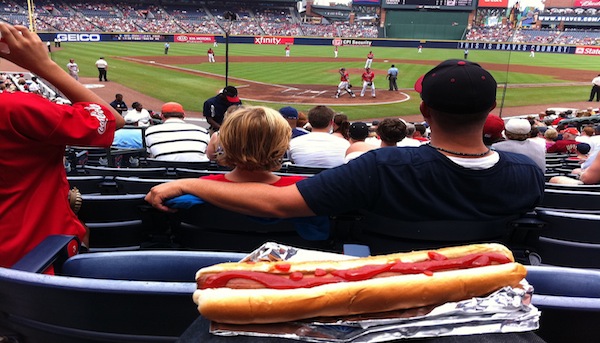 Heading out to a Major League baseball game this season? You may be pleasantly surprised at the food stands, especially if hotdogs and nachos aren’t your thing. Yep—the locavore foodie trend has hit the major leagues.

“New offerings with a local flare at MLB ballparks this season include the Chicago White Sox’s Chicago pork chop sandwich and the Seattle Mariners’ salmon sandwich, featuring fresh Pacific salmon from waters local to Seattle,” reports Forbes. “What is unique about the updates ballparks are making to their menu selections is the role fans played in driving the changes.”

Not that a lack of good food will deter any fan from attending a game—but there’s a financial incentive for these stadiums to cater to the diverse appetite of its sports fans.

And how about this: “To incorporate local flavor, Centerplate has gone as far as planting a garden next to the Denver Convention Center that serves as the source of produce for its offerings at that location,” reports Forbes. An edible garden. At a convention center. “Centerplate’s adoption of locally sourced ingredients and involvement of regional chefs in its business model is about more than making good food,” notes Forbes. “Rather, it is about driving fans to stadiums.”

So, these aren’t the purest of motives. But if locally sourced food is going to put fans in the seats, it’s a step in the right direction. Who knows, maybe next year stadiums will be selling gardening gear with team logos. Or ticket stubs made out of seed paper. Has someone patented a “homerun tomato” yet? Probably about time.