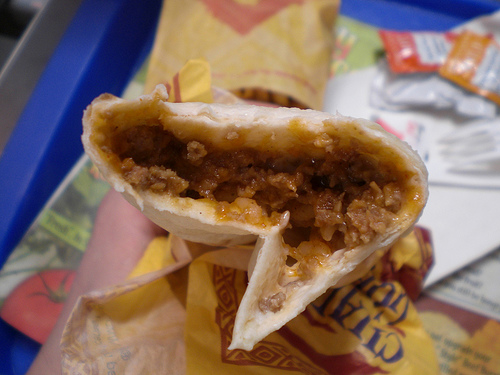 A California woman is suing Taco Bell for false advertising. The claim? There’s too little “beef” in Taco Bell’s products for the company to label their products as such.

The USDA mandates that any food labeled as “meat taco filling” should have at least 40 percent fresh meat (which is kind of astonishing in itself). According to the woman’s law firm, Taco Bell’s taco filling only has 36 percent meat.

What makes up the rest of the meat taco filling, you might ask? Here’s the list of ingredients that comprises the remaining 64 percent:

From fast food meals that don’t decompose to pink slime in burgers and now “beef” that’s not really beef, it’s becoming increasingly apparent that fast food joints are selling nothing but fake food.

Fake food doesn’t just exist at fast food restaurants like Taco Bell, though. It’s ubiquitous in grocery stores too. In fact, processed food represents the majority of the average American’s diet, which has dramatically increased rates of obesity, diabetes, cancer, heart disease, and allergies in this country. Even health-conscious people often rely too much on processed foods like power bars, soy cheese, and veggie burgers.

I think that the best way to take a stand against this tide of fake food is to eat real food – vegetables, fruits, nuts, grains, and honest proteins. What do you think?

Image courtesy of Like_the_Grand_Canyon via a Creative Commons license.