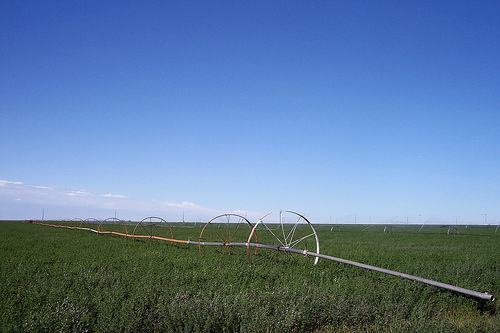 Overturning an appeals court ruling, the Supreme Court ruled that banning Monsanto’s genetically engineered alfalfa was too drastic, but it’s not too late to uphold the ban.

This is definitely a blow for folks concerned about genetically engineered crops, but it’s not the end of this battle. The ruling essentially put the power back in the hands of the USDA to decide how to handle this GM crop.

Currently, about 1% of the alfalfa in the US is this Monsanto variety – it was grandfathered in before the ban was in place. As we’ve seen with other GM crops, though, once approved its use will most likely skyrocket, and that’s bad news for organic famers.

Beyond concerns about the impacts this could have on health, alfalfa is a unique crop in that the risk for cross-contamination is incredibly high. If this GM alfalfa contaminates organic or conventional varieties, it could seriously hurt not only organic growers but exporters. Countries that ban GMOs would no longer allow imports of their alfalfa.

Organic dairy farmers are especially concerned, since alfalfa is a main component in their cows’ feed, and cross contamination would damage their organic status.

So what can we do?

It’s not over yet. The USDA has ordered an Environmental Impact Study (EIS), which they should have conducted before originally approving the crop in 2007. However, according to Food Navigator, “A draft EIS report released in December found no significant effect from the seeds on the environment or human health.”

If you’re concerned about Monsanto’s GM alfalfa, there’s still time to let the USDA know! 56 members of Congress have already spoken out against GM alfalfa, and the more voices chiming in the better! The Center for Food Safety has a helpful template letter that you can send to your representative.

You can also tell the USDA how you feel. Food & Water Watch has a simple form you can fill out to send your comments right to the USDA.