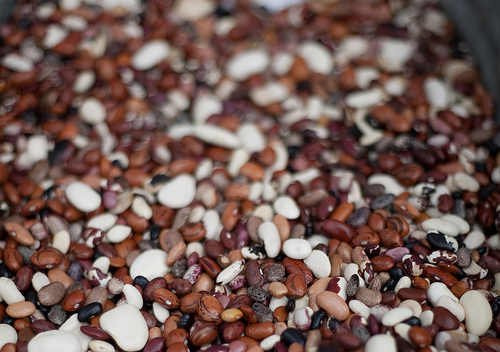 As many as 2 billion people worldwide are iron deficient.  This is particularly a problem in developing countries, but it is by no means limited to them.  Iron deficiency is the number one nutrient deficiency in the US.

Researchers are searching for a bean that would boost iron consumption as a possible solution to the food crisis, as well as to provide better nutrition for all.

Iron’s role in the body

Iron plays an important role in the body.  It is an essential component of blood and is the nutrient that allows the blood to transport oxygen all over the body.  When a person does not consume enough iron, they become iron deficient and the blood loses its oxygen carrying capacity.  Some symptoms of iron deficiency include tiredness and weakness often resulting in decreased work performance, decreased immune system functionality leading to higher risk of infection, and difficulty maintaining body temperature.  Serious iron deficiency leads to anemia, which can cause many other complications.  Medical conditions where blood is lost put one at higher risk for iron deficiency.  Women are particularly at risk because they lose a small amount of blood during their menstrual cycle each month.

Many foods contain iron, but our bodies can absorb iron from some sources more easily than others.  This is referred to as the bioavailability of iron.  The iron found in red meat is highly bioavailable – almost all of the iron consumed from red meat can be absorbed.  On the other hand, foods like beans and spinach also contain a significant amount of iron, but it is less bioavailable than iron obtained from red meat.

The amount of iron we can absorb from plant sources depends heavily on the other foods we eat with it.  Vitamin C from an orange eaten with beans will help absorb iron from the beans, but eating  beans with coffee or tea, may inhibit iron absorption.  There are numerous other factors that affect iron absorption.  In fact, some foods, notably spinach, can interfere with themselves in iron absorption!  Because of this complex interplay, the best way to ensure adequate iron consumption is to eat a variety of foods.  This is especially true for those who do not each much meat.

The sad reality is that not everyone has access to a variety of foods and meat.  Even if they do, they still may not eat a balanced diet.

Researchers are working on developing a bean that will have far superior bioavailability than current beans available.  Beans are an ideal candidate to be supercharged to rescue the world from the food crisis because they are already popular in a variety of world cuisines, contain many valuable nutrients, including protein, and store well when dried.  Such a bean could improve access to a reliable main iron source for those who simply do not have access to a variety of foods.

Initial research has shown that some existing beans naturally contain more bioavailable iron than others.  The compound in beans that is believed to block iron absorption is an antioxidant, kaempferol.  Developing or breeding a bean without kaempferol may sound like the solution; however, kaempferol is a polyphenol – a potentially important group of nutrients.  Before the super-beans are available in the grocery store, researchers will need to better understand the complex interplay of nutrients within the bean.

Until then, here is a list of some iron-rich foods: http://www.healthcastle.com/iron.shtml