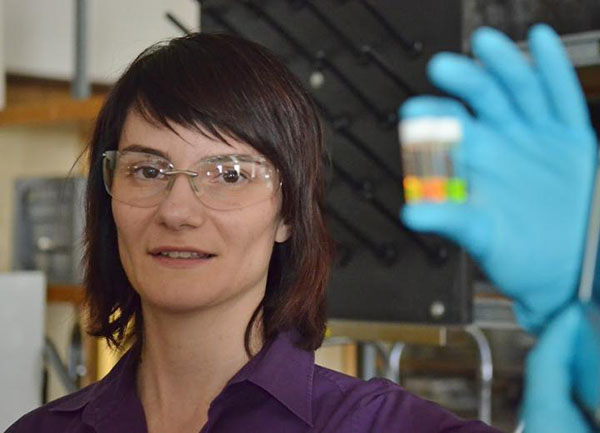 The research team discovered light energy can be used to change dinitrogen (N2), a molecule made of two nitrogen atoms, to ammonia (NH3), a compound of nitrogen and hydrogen. The researchers hope the newly discovered, light-driven chemical process that creates ammonia can lead to future developments that will enhance global agricultural practices while decreasing the dependence of farmers on fossil fuels.

Traditionally there have been two main ways to transform nitrogen, the most common gas in Earth’s atmosphere, for use by living organisms:

The team showed nanocrystals of the compound cadmium sulfide can be used to harvest light, which then energizes electrons enough to trigger the transition of N2 into ammonia.

“The key was to combine semiconductor nanocrystals that absorb light with nitrogenase, nature’s catalyst that converts nitrogen to ammonia,” said Dukovic. “By integrating nanoscience and biochemistry, we have created a new, more sustainable method for this age-old reaction.”

Developing a better environmental footprint concerning the development and use of various fertilizers is a fundamental challenge facing the international agricultural  industry.

As reported by Scientific American, many synthetic chemicals used to produce fertilizers are petroleum-based. While these fertilizers have allowed farmers and gardeners to exercise greater control over the plants they want to grow by enriching the immediate environment and warding off pests, these benefits have come with environmental costs, such as the runoff pollution of many streams, rivers, ponds, lakes, and coastal areas.

“When the excess nutrients from all the fertilizer we use runs off into our waterways, they cause algae blooms sometimes big enough to make waterways impassable. When the algae die, they sink to the bottom and decompose in a process that removes oxygen from the water. Fish and other aquatic species can’t survive in these so-called “dead zones” and so they die or move on to greener underwater pastures.”

This discovery might pave the way for sounder fertilizer-manufacturing methodologies which have a safer environmental impact.

Image via University of Colorado; via Planetsave