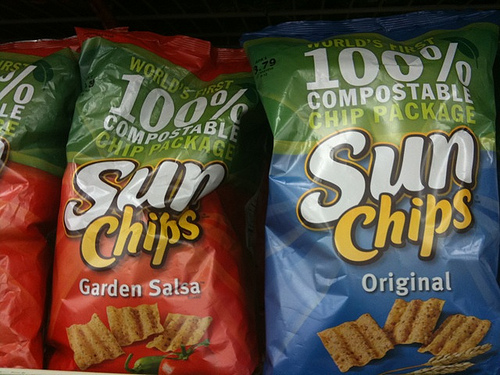 A year and a half after introducing the world’s first compostable chip bag, Frito-Lay is ditching SunChips’ green packaging. The reason? Consumers complained it was “too noisy.”

The bags were made from plant-based materials that were 100 percent biodegradable, meaning that they would produce less landfill waste.

To make the bags compostable, Frito-Lay had to adopt packaging with a more rigid molecular structure. Unfortunately, this rigid packaging also made the bag too noisy for American consumers. People complained that eating chips from the bag drowned out the sound of their TVs, and compared the noise to lawnmowers or jet engines.

According to Frito-Lay, the bags caused SunChips sales to drop by more than 11 percent. As a result, the company has decided to return SunChips to its former non-biodegradable packaging.

For many environmentalists, the idea that Americans favor a silent chip bag over an eco-friendly one does not bode well for our ability to counter environmental degradation.

In the grand scheme of things, this is the absolute, bare-minimum level of sacrifice Americans are asked to make. They still get to eat the same chips, they just come from a different bag. . . But apparently that’s still too much. Even worse is the fact that Americans can’t muster the support to pass a climate bill, but a bunch of angry couch potatoes can successfully mobilize to force Frito-Lay to drop their innovative packaging. If the sound of a crinkly eco-chip bag is too much to handle, then the human species really is screwed.

What do you think the SunChips experiment says about our willingness to go green?

Image courtesy of inju via a Creative Commons license.