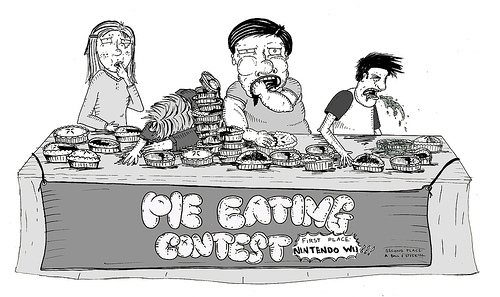 According to the Taipei Times, a student at Dayeh University in Changhuain Taiwan died in late October during the annual steamed bun eating contest. The 23 year old was participating to see who could finish two steamed buns stuffed with egg and cheese in the fastest time. The student couldn’t stop vomiting and fell unconscious during the competition. Although he was rushed to the hospital, it was too late. The cause of the death remains unclear, but some believe he choked to death. All this for NT$2,000 (approximately US$60.)

There are competitive eating events for all types of foods, from pizza, hot dogs and ice cream to matzo balls, pickled quail eggs and Maui onions. And according the International Federation of Competitive Eating, yes this is a real organization, the sport, and I use this term loosely, “…dates back to the earliest days of mankind and stands alongside original athletic pursuits such as running, jumping and throwing.”

Competitive eating isn’t about culinary enjoyment, it’s about consumption – and fast consumption at that. I have to question the sanity of anyone who’d eat 17.7 pounds of cow brains in 15 minutes or 7 – ¼ pound sticks of butter in 5 minutes, both which are actual records. Since participants aren’t sponsored by major corporations, what’s in it for them? My guess is lots of free food, fifteen minutes of fame, one way to promote a product, and probably indigestion.

The show is described as a cross between an eating competition and “The Amazing Race.” Two teams of contestants rush to various Los Angeles eateries and gorge themselves in ace-stuffing challenges.

Why are they considering this obnoxious and disgusting visual train wreck? Probably because in August, nearly 1.5 million people tuned in to ESPN to watch Joey Chestnut beat Takeru Kobayashi in Nathan’s Famous Fourth of July Hot Dog Eating Contest. As I’ve asked previously, just because one can do something, doesn’t mean one should.

The people over at Yumsugar.com summed it up perfectly,

At a time when American major league eating competitions are gaining popularity, I hope the news of this death will force people to wake up. Is a competition involving overeating – in a world where people starve to death – really necessary?

photo credit: Fatty McFatty via an attribution license by Ren Byrd on Flickr.com