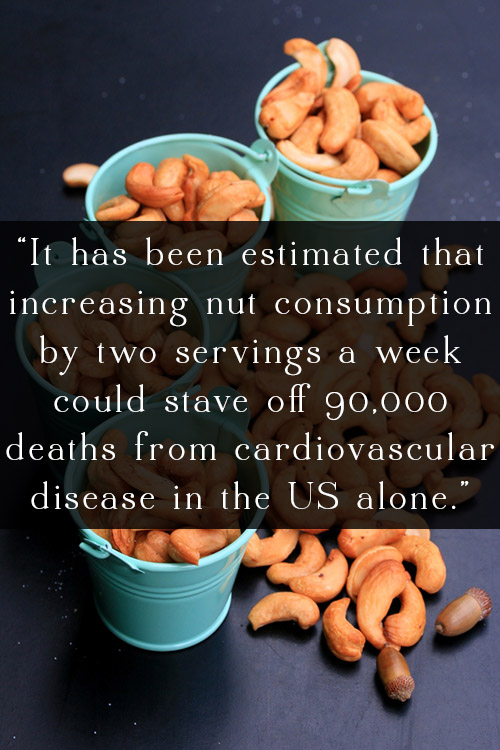 A new paper, published in the journal Open Heart, argues that counting calories isn’t as important as looking at food’s nutritional value when it comes to heart health.

Instead, the authors suggest focusing on swapping out unhealthy foods and drinks for heart-healthy alternatives. Choosing foods with healthy fats like nuts and olive oils and avoiding processed foods and sugary drinks does more for heart health than focusing on total calories.

I know that anecdotal evidence isn’t very scientific, but I’ve definitely seen the benefits of this mindset on my own health. When I decided to stop counting calories and focused instead on eating healthy, plant-based foods, I lost weight and saw my high cholesterol woes evaporate within just a few months.

This makes perfect sense, doesn’t it? The more you focus on eating healthy food, the less room there is in your diet for unhealthy choices. According to a press release from the authors, “It has been estimated that increasing nut consumption by two servings a week could stave off 90,000 deaths from cardiovascular disease in the US alone.”

They explain that the focus on counting calories has really come from the weight loss industry, and it’s time for real clinicians to start advocating evidence-based health advice. “Primary and secondary care clinicians have a duty to their individual patients and also to their local populations. Our collective failure to act is an option we cannot afford.”

You can read the full press release right here.

It’s time to stop counting the calories, and instead start promoting the nutritional value of foods if we are to rapidly cut illness and death from cardiovascular disease and curb the rising tide of obesity, say experts in an editorial published in the online journal Open Heart.

For example, boosting omega 3 fatty acid (from fatty fish), olive oil, and nut intake have all been associated with reductions in deaths from all causes and from cardiovascular disease, within months, they say.

But clinicians have failed to act for far too long, amid an excessive focus on the calorific content of food by the food and weight loss industries, despite mounting evidence that it’s the nutritional content that matters, they suggest.

Daily consumption of a sugary drink (150 calories) is associated with a significantly increased risk of type 2 diabetes whereas daily consumption of a handful of nuts (30 g of walnuts, 15 g of almonds and 15 g hazelnuts) or four tablespoons of extra virgin olive oil (around 500 calories) is associated with a significantly reduced risk of heart attack and stroke.

It has been estimated that increasing nut consumption by two servings a week could stave off 90,000 deaths from cardiovascular disease in the US alone.

And the Action for Health in Diabetes trial shows that a low calorie diet on top of increased physical activity in patients with type 2 diabetes was not associated with a reduced risk of cardiovascular death despite significant weight loss and a monitoring period of 13.5 years, they point out.

“Shifting the focus away from calories and emphasising a dietary pattern that focuses on food quality rather than quantity will help to rapidly reduce obesity, related diseases, and cardiovascular risk,” they insist.

“Primary and secondary care clinicians have a duty to their individual patients and also to their local populations. Our collective failure to act is an option we cannot afford,” they write, citing the human and economic toll this is taking.

Obesity costs the NHS over £5 billion a year, while the costs of type 2 diabetes add up to more than £20 billion and are predicted to double over the next 20 years. Similarly, the cost of diabetes has risen 40% in the past five years in the US, adding up to $245 billion in 2012, they say.

The evidence shows that poor diet is consistently responsible for more disease and death than physical inactivity, smoking and alcohol put together, they say, calling for sugary drinks to be taxed; government subsidies to make fruit, vegetables, and nuts more affordable; and tighter controls on the marketing of junk food.

“Applying these population wide policies might achieve rapid reductions in disease and hospital admissions visible even within the electoral terms of most politicians,” they suggest.

“It is time to stop counting calories, and time to instead promote good nutrition and dietary changes that can rapidly and substantially reduce cardiovascular mortality. The evidence indeed supports the mantra that ‘food can be the most powerful form of medicine or the slowest form of poison’,” they write.

“Recommending a high fat Mediterranean type diet and lifestyle to our patients, friends and families, might be a good place to start,” they conclude.