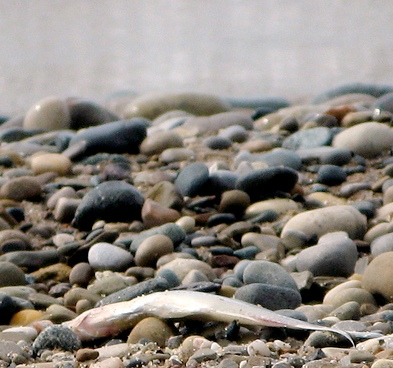 West Virginians eat less fish than them thar other parts of the country, so it’s just fine that that state’s mercury allowance is almost twice that of the federal level.

The West Virginia Department of Environmental Protection (DEP, though the thinking here clearly wasn’t) said that the state standard of 0.5 micrograms per gram of fish tissue is fine as compared to that of the Clean Water Act (0.3 micrograms per gram).

In a puzzling quote with West Virginia Public Broadcasting, a DEP environmental resources analyst, Mike Arcuri, said this on the policy:

The more fish people consume in a given area, the lower that number has to be in order to keep the public safe, if that makes any sense.

If he’s having trouble making sense of his own quote, might his department want to rethink their policy on the neurotoxin?

As you probably know, mercury has neurotoxic effects. That’s why we don’t want it in our vaccines! Not to mention our high fructose corn syrup, for those who actually consume the stuff. According to the EPA:

The primary health effect of methylmercury is impaired neurological development. Methylmercury exposure in the womb, which can result from a mother’s consumption of fish and shellfish that contain methylmercury, can adversely affect a baby’s growing brain and nervous system. Impacts on cognitive thinking, memory, attention, language, and fine motor and visual spatial skills have been seen in children exposed to methylmercury in the womb.

Or, as Janice Nease, of the Coal River Mountain Watch put it,

The fact that West Virginia is eating a lot less fish; doesn’t that seem to tell him that we are afraid to eat the fish?

Good call. Enviros in WV say that coal mining has a whole lot to do with the amount of mercury in the rivers.

Coal is supposed to stay in the earth. Once you disturb it, there’s all kinds of ugly things that come out of it and we end up consuming. It’s a shame that we can’t take our children and our grandchildren down to the river, teach them how to fish and then also teach them that if you catch that fish what you do is you consume it, you eat it.

But don’t tell the WV coal companies that. There, the roads are shadowed with billboards that declare, “Coal: It Keeps the Lights On!”

It also keeps the residents from living happily near waterways, practicing the time-honored tradition of eating what they catch. And to think, I’ve been pondering a move to my neighbor state, snagging a plot of land next to a river, and working toward self-sufficiency. Hmm…might have to rethink the big plans.

As a side note, the WVPB mentioned that there is already a statewide fish consumption advisory in effect. Tell me again why West Virginians avoid the fish?

Image: kevindooley on Flickr under a Creative Commons License.