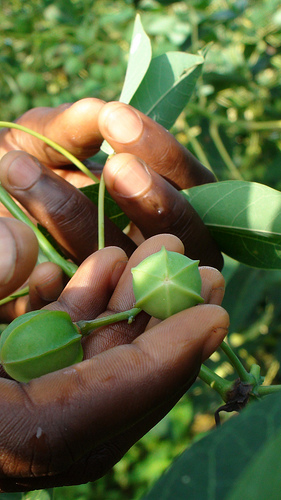 It’s nearly a half-century since the Green Revolution and yet a large share of the human family is still chronically hungry. Since the mid 1980s when agricultural funding was at its height, the share of global development aid has fallen from over 16 percent to just 4 percent today. Drawing from the world’s leading agricultural experts and from hundreds of innovations that are already working on the ground, State of the World 2011 will help serve as a road map for the funding and development communities.

Over the last year, the Nourishing the Planet project has traveled to 25 sub-Saharan African nations—the places where hunger is the greatest and rural communities have struggled the most—to hear people’s stories of hope and success in agriculture. Africa has among the most persistent problems with malnutrition, but it also a rich and diverse breeding ground for innovations in agriculture. From oyster farmers in The Gambia to school gardens in Uganda to rotational grazing in Zimbabwe, State of the World 2011 draws from hundreds of case studies and first-person examples to offer solutions to reducing hunger and poverty.

In The Gambia, some 6,000 women organized into the TRY Women’s Oyster Harvesting Producer Association, creating a sustainable co-management plan for the local oyster fishery to prevent overharvesting and exploitation. The 15 communities, comprising nearly 6,000 people, agreed to close one tributary in their oyster territories for an entire year and to lengthen the “closed” season in other areas. They are also working together to educate the community about the benefits of mangrove restoration and building hatcheries to boost wild stocks. The improved quality and size of the resulting harvests are garnering higher prices at local markets, and the association is working on developing relationships with upscale hotels and restaurants that are interested in buying wholesale.

In Uganda, Developing Innovations in School Cultivation (DISC) program is integrating indigenous vegetable gardens, nutrition information, and food preparation into school curriculums to teach children how to grow local crop varieties that will help combat food shortages and revitalize the country’s culinary traditions. As a result, these students grow up with more respect—and excitement—about farming. At Sirapollo Kaggwass Secondary School, Mary Naku, a 19 year-old student, who is learning farming skills from DISC, said that she has gained leadership and farming skills. “As youth we have learned to grow fruits and vegetables,” she says, “to support our lives.”

And in South Africa and Kenya, pastoralists are preserving indigenous varieties of livestock that are adapted to the heat and drought of local conditions—traits that will be crucial as climate extremes on the continent worsen. In Maralal in the Northern region of Kenya, one group of Maasai pastoralists is working with the Africa LIFE Network to increase their rights as keepers of both genetic diversity and the land. Jacob Wanyama, coordinator for the African LIFE Network and advisor to the Nourishing the Planet Project, says Anikole cattle—a breed indigenous to Eastern Africa and traditionally used by pastoralists in the area for centuries—are not only “beautiful to look at,” but they’re one of the “highest quality” breeds. They can survive in extremely harsh, dry conditions—something that’s more important than ever as climate change takes a bigger hold on Africa. “Governments need to recognize,” says Wanyama, “that pastoralists are the best keepers of genetic diversity.”

Launched today at WNYC’s The Greene Space, the report includes a chapter on reducing food waste written by food activist Tristram Stewart, as well as chapter on how addressing the unique needs of women farmers, who in many parts of the continent represent 80 percent of small scale farmers, can improve livelihoods and diets for entire communities, written by Dianne Forte, Royce Gloria Androa and Marie-Ange Binwaho. State of the World 2011 provides new insight into the under-appreciated innovations that are working right now on the ground to alleviate hunger and deserving of more funding and attention.

Connect with Nourishing the Planet on Facebook by clicking HERE