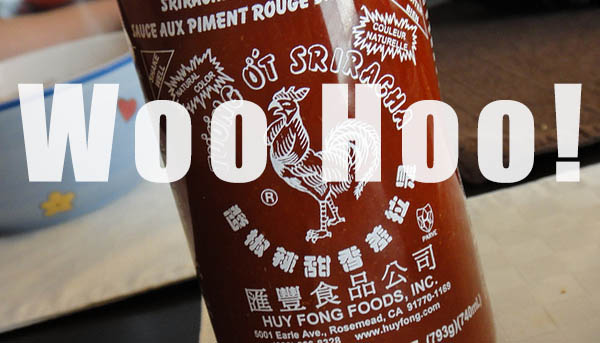 Great news, hot sauce lovers: it’s going to be business as usual at the Sriracha factory in California!

According to an article in yesterday’s Los Angeles Times:

Thursday’s ruling could mean that next year’s supply of Sriracha hot sauce is secure. According to a declaration from Huy Fung Foods founder and chief executive David Tran filed in court Thursday, the process of harvesting, grinding, and storing the chiles needed for next year’s sauce could be completed in just over a week — well before the next court date. But the pace of the harvest and production process depends on the weather and on the chiles themselves, Huy Fong officials said.

Part of me does feel for the folks in Irwindale a little bit. I’ve made my share of hot sauce at home, and a small batch makes me house reek of peppers and vinegar for days. I can’t imagine what a full-scale operation must smell like.

When the company first got complaints from area residents, it promised to do everything it could to reduce emissions, and it’s going to continue to do so. They’ve installed carbon filters and are planning to add a second layer of filters to keep that pepper-garlic-vinegar smell at bay:

The company added a second layer of filters and invited inspectors into the plant. City officials, according to Tran, suggested using an air-filtration system that would cost $600,000 to install, but Tran said he wanted to explore other options.

Some city officials are saying that those filters aren’t enough, however, and if area residents continue to complain they may go after the factory again. Fingers crossed that they can all work this out!