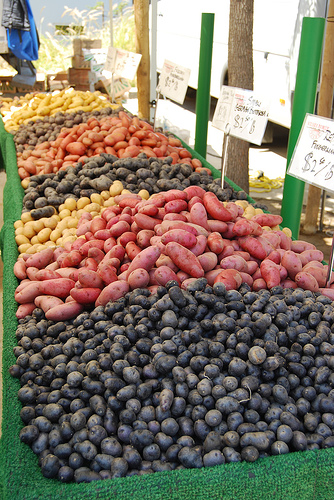 Just 15 minutes down the road from Sarah Palin’s stomping grounds of Wasilla, there is a party going on. A potato party. Bill Campbell, a local agronomist, hosted the Palmer Potato Pageant at the Railroad Depot in Palmer, AK.

The litany of alliteration unfolded with a planned Potato Potluck, exhibition of potato paraphernalia, potato poetry, and a potato party in the pomme de terre province of Palmer.

All bad puns aside (seriously), many societies would not have survived if it wasn’t for the humble potato, and some almost didn’t make it because of the potato. In fact, each American eats over 100 pounds of potatoes a year, and we are not alone. The United States produced just over 17.5 million tons of potatoes in 2007, which was a slight decrease from the previous year, but still enough to put us at the number 5 spot worldwide.

When it comes to potatoes, it’s not all russets and reds. There are some awesome varieties of heirloom potatoes out there, and Seed Saver’s Exchange has a pretty good selection of seed potatoes so that you, too can experience the thrill of yanking them from the soil. Potatoes come in shades from bright pink to purple to rich, golden yellow, and as many shapes as you can imagine. Grab your local extension agent and get to know your spuds. Early spring is plantin’ time, but you’ll still find stored potatoes at farmers markets now.

Sure, we all know what a potato looks and tastes like, but not many people go beyond that. The potato is actually a member of the nightshade family, and is related to the tomato and eggplant. You may be familiar with deadly nightshade, one of the most toxic plants found in the Western hemisphere. But a glimpse into the natural history of the potato is fascinating.

Thanks to a little evolution and careful breeding, once the potato came down from the Andes where it is native, it adapted to the longer daylight conditions in Europe. From this act of adaptation, and after few hundred years, we all can now enjoy curly fries at the state fair without so much as a second thought.

But the “humble” potato is really much more than that. It is a crucial staple crop that keeps us humans going from day to day. The potato continues to adapt today, and is being grown increasingly in developing countries. China is now the world leader in potato production, with a whopping 72 million tons produced in 2007.

So the next time you blithely ignore the humble “devil’s apples” in the market, think of the long journey those starchy roots have made, and take a little time to celebrate the Year of the Potato. Governor, will you join us?