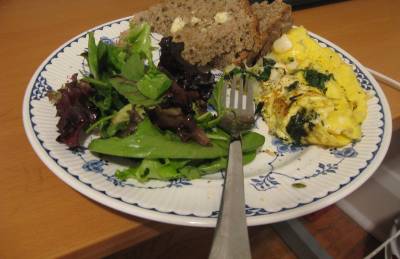 While browsing the St. Lawrence Market last weekend, I was elated to spot the paisley-shaped heads of fiddlehead ferns. I won’t get into my love for the regional delicacy too much, as Jennie already posted a great recipe, but I felt that – despite their season of only a few weeks – the wild, gamey greens deserved more than one ode to their deliciousness.

Before I’d left the market, I’d snapped up two bunches of ramps and a bag full of stinging nettles among my regular staples. In fact, the stinging nettles purveyor was kind enough to write out a recipe for tea (pictured below). It was my first ever stinging nettle experience.

More on that and other recipes inspired by my wild green windfall after the jump.

One bunch of ramps – about 9 stalks, finely chopped. Separate the chopped leaves from the stalks and bulbs

a few sprigs of thyme

Steam potatoes until tender, then cut into small cubes. Sauté the potatoes with the ramps (stalk and bulb) in a cast iron or copper skillet until both have good color. In a bowl, mix together the eggs, milk, herbs and spices. Pour over the potato and ramp mixture. When the edges of the frittata start to become solid, place cheddar across the top and then put the pan in the oven for about 5 minutes, checking often.

coarsely chopped ramp leaves from the above stalks

Thoroughly wash the fiddleheads in changing baths, making sure all grit has been removed. Steam them for 5-7 minutes and then rinse them again in cold water. While they are steaming, heat the oil and butter in a pan and let the ramps sweat. Put the steamed and bathed fiddleheads into the pan, turn up the heat to a simmer and add soy sauce, rice wine vinegar and aji-min sparingly. The key is to highlight the fiddlehead’s taste – not mask it. When the fiddleheads have turned a deep green and are to satisfying doneness (5 – 10 minutes), add the ramp leaves until they are wilted. Salt and pepper to taste, transfer to a plate and serve!

Note: The CDC issued a warning about fiddlehead ferns after a 1994 outbreak of gastrointestinal maladies that was attributed to undercooked fiddlehead ferns. This has led some to advocate overcooking the fiddleheads, to which most fiddlehead lovers say, “sacrilege!” Tomato, tomahto. You can read about it here and decide for yourself.

While I can’t say this is delicious, I did feel healthier for drinking it. Many herbalists and naturopathic practitioners believe that it is a blood builder and cleanser, digestion aid and anti-inflammatory tonic. It is often used to treat arthritis and anemia, but France’s herbal medicine guide also indicates stinging nettle tea as a treatment for acne and eczema. Placebo or otherwise, I thought it was a worth a try!

Bring 1 Liter (4.25 cups) of filtered water to a boil in a saucepan. Once the boil is rolling, remove the saucepan from the burner and add one large bunch (about 2 cups) of stinging nettle. Allow the nettle to steep for 2-3 hours in the water and then strain the resultant tea into a glass jar or other non-reactive container.

I added some honey to mine, which I don’t recommend doing because the flavor is savory.

Notes: When handling the nettles, use tongs or wear gloves – the spiny thorns of the plant puncture your skin and release formic acid, which smarts.

The tea will last for a week in the fridge, but it is best to consume it all within a two day span to get the maximum health benefits.