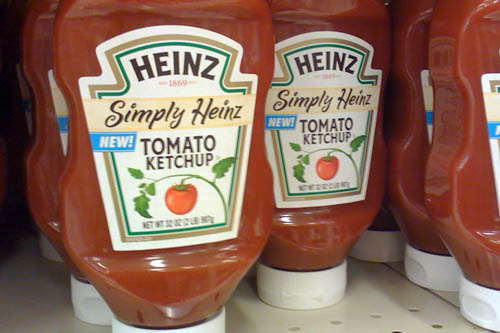 Last week, Heather talked about ketchup makers revamping their recipes to cut out he high fructose corn syrup. Just the other day, I was at the grocery store with my sister-in-law when there it was on the shelf!

It looks like not just Heinz and Hunts are jumping on the real sugar bandwagon. Check out this bottle of store-brand ketchup I spotted:

As Heather mentioned when we were talking about the revamped ketchups, “the main people to impress with this change will be the kids. If it gets past them, everything will be good.” While I’m not thrilled about what this says about kids’ diets here in the U.S., it’s probably true.

Reader CCF made a great point in the comments on Heather’s original post, too:

Hunt’s switch to refined sugar is, as you say, motivated by sugar’s popularity, not a health principle. I hope that [people] don’t think they are getting some health benefit out of the switch. Both ketchups will have the same number of calories.

Very true. Ketchup isn’t the healthiest food, but I do think the response from large companies like Hunts and Heinz shows that we have power as consumers to influence companies’ actions. The vote made with our pocketbooks is a powerful one.