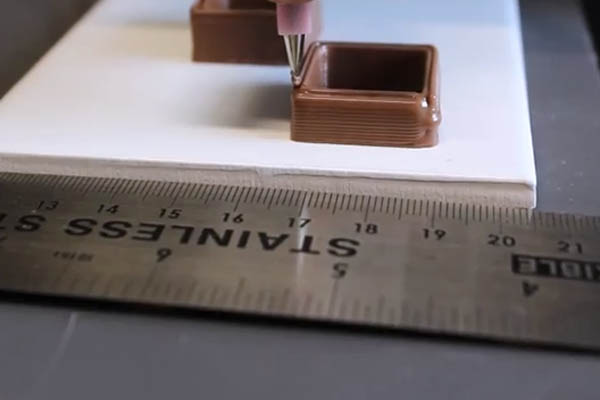 If you’re into fun techie stuff, you’ve probably seen 3D printers – devices that use melted plastic to “print” 3D designs. Dr. Liang Hao from Britain’s University of Exeter just released a 3D printer that works on the same principle, only instead of plastic, it prints chocolate.

Just like any other 3D printer, it uses a syringe to layer melted material to create designs that the user loads into the printer. With a $3,000 price tag, you’d have to be pretty into chocolate and gadgets to snag one, but the first one sold on eBay on April 19th.

The machine is not commercial grade, which means that you can print and eat chocolate all day, but you can’t yet sell the chocolate that you print with this machine. Dr. Hao is working on a commercial grade version of the Choc Creator, according to the folks at Fast Company.

Want to see the chocolate printer in action? Check out this video!

Since it looks like you can use any chocolate you want in the Choc Creator, you could even print up pretty vegan chocolate and use fair trade chocolate, too! What designs would you print if you had a 3D chocolate printer?

Image Credit: Screenshot from video above