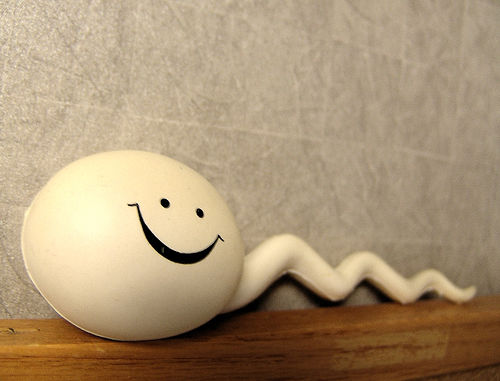 A recent study of male Chinese workers has found that the infamous endocrine-disrupting chemical bisphenol A (BPA) causes sperm counts and concentrations to drop. Additionally, it found that the “quality” of the sperm was worse, meaning lower sperm motility (the ability of sperm to move towards an egg) and higher mortality.

This study was a 5-year study of 514 male Chinese workers conducted by researchers at Kaiser-Permanente in Oakland, California and published in the peer-reviewed Fertility and Sterility.

This confirms what many of us already assumed based on previous animal studies — detectable levels of BPA in urine are associated with significant, negative hormonal and reproductive problems in humans.

With 90% of Americans having detectable levels of BPA in their urine, this is, of course, quite concerning.

The researchers who conducted the study above have also published two other peer-reviewed papers without very cheerful results. Kaiser Permanente staff write:

The first one appeared in November 2009 in Human Reproduction, and found that exposure to high levels of BPA in the workplace increased the risk of erectile dysfunction in men. The second study appeared in May 2010 in the Journal of Andrology; it correlated increasing BPA levels in urine with declining male sexual function.

So, combined with this new study, we can see that men are getting quite the hit from BPA.

For years, with animal studies showing the same things as above, the chemical industry has flat out said those studies don’t apply to humans. But a statement from the industry following this study makes one small step towards admitting the truth.

This study of Chinese workers with high exposure to BPA is of limited relevance to consumers who, by contrast, are exposed to only very low levels of BPA.

Of course, with 90% of Americans showing detectable levels of BPA in their urine, this statement is a little misleading. Furthermore, Environmental Defense Fund Senior Scientist Richard Denison, Ph.D. said:

Add to this the fact that the current study found the same effects seen at high doses, albeit with less intensity, at doses comparable to those to which men in the general U.S. population are now being exposed – and one has to wonder just how much longer the industry is willing to fight the inevitable.

It’s time for us, as a society, to own up to the risks of BPA and start getting it out of our products and environment.