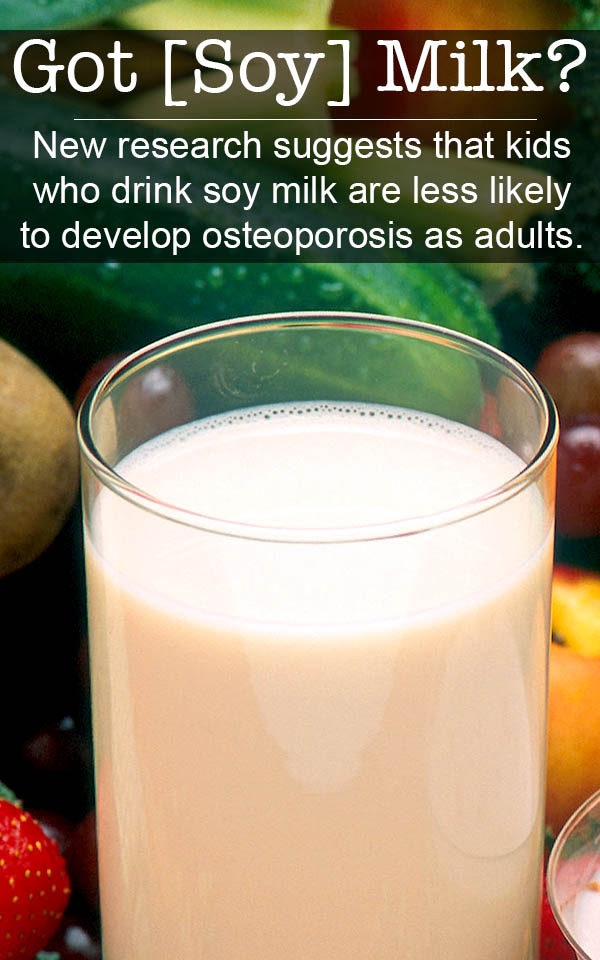 Preliminary research on soy and bone health suggests that kids who eat soy protein may be less likely to develop osteoporosis as adults.

The study, published in The FASEB Journal, looked at female rats who ate soy protein for 30 days when they were very young before switching to a more standard rodent diet until they were six months old. The control group ate a regular rat diet for six months. They found that eating soy protected the rats from bone loss.

Obviously, rats aren’t people, but this research shows that maybe it’s time to give soy another look.

The $36 billion dairy industry spends a lot of money to convince us that we need cow’s milk to grow strong, healthy bones, but this research shows that we don’t need to exploit animals to fight osteoporosis.

When my son was ready to wean, I asked his pediatrician about what kind of milk he should drink. He’s vegetarian, so technically, dairy milk is on the menu, but I hated the idea of giving him cow’s milk every day for many reasons. I was relieved when she told me that, “There is nothing in dairy that your child needs,” and recommended that he drink soy or almond milk instead. She said almond milk was fine as long as he also got two servings of soy per day to get the health benefits of soy. It turns out that her advice may be helping my kid build strong, healthy bones.

Thoru Pederson, Ph.D., Editor-in-Chief of The FASEB Journal said in a press release about the soy and bone health study, “The centuries-old mantra that children need milk to ‘grow strong bones’ remains true, but here we have evidence that the protein components of soy ‘milk’ have key osteogenic effects. This finding could ultimately have major pediatric health impacts throughout various parts of the world.” Pederson is saying that kids do need milk. But maybe that milk should come from soybeans, rather than from cows.

This isn’t the first study finding that soy protein may help prevent osteoporosis. A 2013 study looked at soy and bone health and also found that soy has protective properties when it comes to bone loss.

Beyond Bone Health: Give Soy a Chance

There is definitely more research needed on soy and bone health, but the good news is that adding some soy into your diet can’t hurt. As long as that soy protein is coming from whole food sources.

Soy gets a bad reputation, and it’s totally undeserved. As Tanya pointed out here in 2012, “The soybean has been exploited on a larger scale, but it’s just a bean. Processed foods — with or without soy — can cause problems. GMO foods — soy or otherwise — can cause problems. But soy contains no magic disease demons, no secret toxins, no evil plan to take over the world. It is simply a legume.”

Whether soy protects us from developing osteoporosis or not, there’s no reason to demonize soy. Pass the tofu, please!