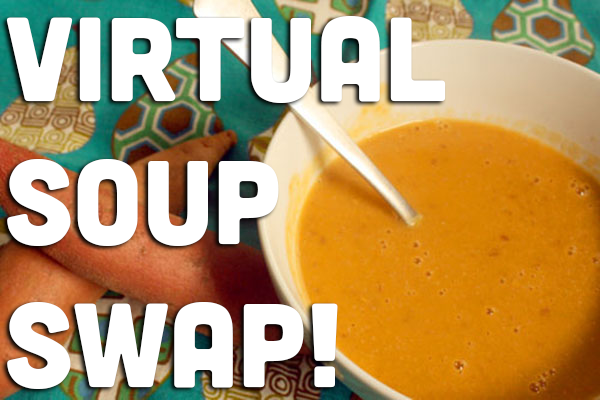 Ever since I got pregnant, I have been obsessed with soup. I’m almost four months along now, so you can imagine how thrilled I am that it’s finally soup weather. Soup is everywhere, and I can eat steamy bowl-after-bowlful without sweating while I do it. Clearly, it’s time for a soup swap, but since you guys live all over the world, we’ll just have to do a virtual one!

Before we even realized that I was pregnant, I was eating soup like it was my job – sometimes for lunch and dinner multiple days in a row! My go-to soup recipe is pretty simple:

Dump everything in a pot and simmer until it’s all heated through.

You can make endless soups this way, and I did! All summer long! Now that fall is here, I’ve been in the mood for heartier soups, like this coconut pumpkin and black bean soup or gingered sweet potato and coconut soup. After looking through my favorite recipes, it’s occurring to me that most of the  hearty soups that I make involve coconut milk.

Don’t get me wrong: I love coconut milk, but! Coconut milk is not a twice-a-day-every-day food. It’s loaded with saturated fat, which is not super healthy. Since I eat a vegan diet, I’m not super worried about saturated fats, but it would be nice to make some hearty soups that are a little bit more hearty healthy, you know what I mean? Just to work into the rotation between coconut milk soup days. This is where you guys come in…

Help a lady out, you guys! What’s your favorite soup recipe? It doesn’t have to be vegan. In fact, I kind of enjoy the challenge of veganizing recipes that call for meat and dairy, so don’t let that stop you!

You can leave the whole recipe in the comments below or just drop a link to your favorite soup recipe online. It’s all about sharing, so let’s swap some soup recipes!