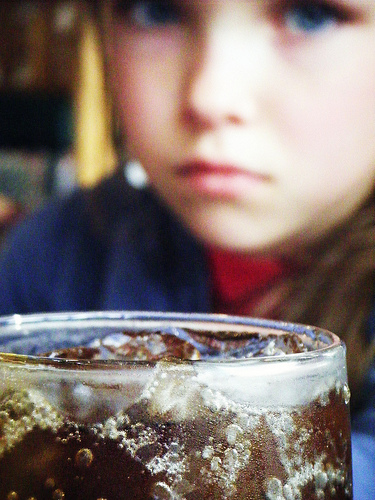 A recent study conducted in Boston shows a correlation between high soda intake and violence among teens.

Harvard completed a study that involved almost 2,000 students in inner city Boston. Most students were either Hispanic or African-American. Factors measured were how many cans of soda drank per week, if the person carried a gun or knife, if they had been violent towards their partner, and if they had been violent towards peers. Students were grouped into those who drank zero to one can per week, and those that drank around fourteen per week. Soda was measured by 12 oz cans, and only regular sodas were measured (not artificially sweetened.)

Teens who consumed fourteen cans of soda per week were far more likely to carry a gun or knife and be violent towards others. A whopping 43% of high soda consumers carried a weapon, while the low soda drinkers measured at 23%. More than 58% of high soda consumers were violent towards peers, while only 35% of low soda drinkers displayed peer violence.

Remember this is a correlation study and does not prove any one part of the soda is directly linked with violent behavior. The study is in much need of elaboration. One researcher noted there was no information regarding the rest of the teens’ dietary habits. It would be interesting to see if there were any other correlations.

I have a feeling it may not be the soda itself, but an overall unhealthy, high sugar, nutrient poor diet. I am very excited to see where this study takes the food world, and can not wait to make recommendations based on the findings. I am thrilled one of the researchers noted this is an indication that everything is not OK in moderation. Moderation is a vague term, and to some two sodas a day may be considered moderate. It is our duty to change that mentality and educate the masses to begin eating, and drinking, real foods again.