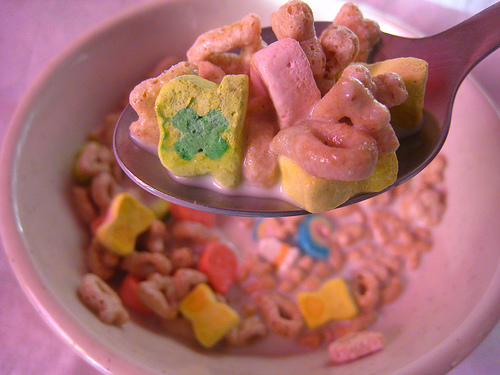 [social_buttons]Last week was a win for healthy foodies! Food manufacturers opted to suspend the Smart Choices labeling program, which would have deemed products like Fruit Loops and Lucky Charms as healthy picks.

Early last week, the FDA issued a Letter to Manufacturers as a warning about misleading front-of-package labeling. Producers like Pepsi are now backing out, and Kellogg’s is going to phase out packaging with the Smart Choices label, too. After public outcry about the labeling choices, the FDA is now working on its own package-front nutrition labeling system.

The food makers are saying that the Smart Choice label was based on federal dietary guidelines but that they are behind the FDA’s plan to create a standardized label. Smart Choices board member Richard Kahn said, “The impetus for the Smart Choices program was that there were and are too many systems. We applaud the concept of having one system nationwide.”

I’m not sure I buy that the Smart Choices program was more about health than about marketing, and it’s great to see the FDA stepping up to help consumers make truly informed decisions. According to Food Politics, they’re going to be “testing how well consumers understand different kinds of package labels.” Here are some of the labels that the FDA is looking at:

I’m a big fan of the UK Traffic Light System but would also love to see something on the front of the package that let you know about allergy information. What do you guys think?